Clara Barton Undertakes Her Very First Relief Work for the Red Cross From 1870: A historic group of 3 documents permitting her to aid the Swiss Army, and the victims of the Franco-Prussian War, under the auspices of the International Red Cross, including her handwritten letter of acceptance 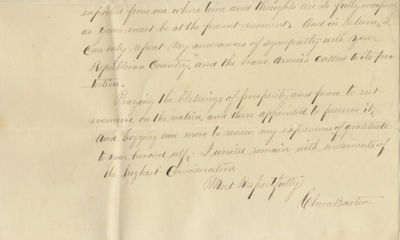 31/07/1870. Clara Barton She carried these documents with her to Europe to prove her engagementIn 1869, Clara Barton traveled to Europe for a much needed rest following her Civil War relief and post-war search for missing soldiers. While visiting Geneva, Switzerland, she learned of the International Red Cross, a war relief organization formed in 1864 which laid out rules for the care of the sick and wounded in wartime; and she met its leaders, who would be her allies in her future endeavors. Twelve nations originally ratified the Red Cross Treaty of Geneva, but Barton was amazed to learn that the U. S. government had rejected the idea of the war relief organization and had not joined, even as she toiled as a private citizen to supply the needs of the wounded on the American battlefields during the Civil War.On July 19, 1870, the Franco-Prussian War began, and Barton - never one to sit on the sidelines - determined to play a part. She wrote a letter to the International Red Cross volunteering her services, and worked under the sponsorship of the Red Cross, even wearing a red cross made of red ribbon. She immediately thereafter received a letter from the head of the Swiss Army, Hans Herzog, requesting her to give aid to the Swiss Army should they need it. She agreed.Herzog sent Barton a letter on July 30, 1870, on his Commandant in Chief letterhead, Basel, Switzerland, with specific information about her aid to the Swiss. “Honored Miss, I have the honor to send you hereby the letter of introduction to Colonel Egloff at Basel and to Colonel Isler at Rheinfelden, commanders in chief of the 1at and 7th division of our army. There are also enclosed in this letter the cards of permission, by which you will be received at all the hospitals and establishments actually prepared for the sanitary service of our army. I am happy to find here an occasion for expressing you once more my warmest thanks for your noble and generous offers and your kind feelings for our country, and I beg you to accept my most respectful salutations.”Included is the letter of recommendation from General Herzog to Colonel Egloff, Commander of the 1st division in Basel. In German, it states: “The carrier of these lines is Ms. Clara Barton from Philadelphia in North America, who has taken excellent care of the wounded during the American wars on the battlefields and in field hospitals. In case of war, her service is available to us and she has even offered considerable help from America for our ambulances and our Hospital Service. Meanwhile she wants to visit our ambulances and our hospital facilities so she can advise the relief committee in Basel. Therefore I ask you to please grant Miss Clara Barton access to the ambulance service of the first division and to please inform her about all our facilities. You also need to supply an English speaking officer.”Barton responded to Herzog on Legation of the United States of America letterhead, July 31, 1870, being her retained copy in her hand. “Permit me in acknowledging your favors this day received to express to you my most heartfelt thanks for the kindness you have extended to me, and which, as a stranger I could not have expected from one where time and thoughts are so fully occupied as yours must be at the present moment. And in return, can only repeat my assurances of sympathy with your Republican country, and the armies called to its protection. Praying the blessings of prosperity and peace evermore on the nation, and those appointed to preserve it, and begging once more to renew my expressions of gratitude to your honored self, I would remain with sentiments of the highest consideration.”That day she left for the war front, but first stopped at Basel to see Egloff. There she saw huge Red Cross storehouses with contributions from all over Europe, and a thriving organization. This convinced her of the utility of the Red Cross. Thus was born her determination to found an American Red Cross.At the front, she helped deliver supplies to needy war-zone citizens, worked in the preparation of military hospitals, and gave the Red Cross society much aid. At the joint request of the German authorities and the Strasbourg Comité de Secours, she superintended the supplying of work to the poor of Strasbourg. After the Siege of Paris, she had charge of the public distribution of supplies to the destitute people of that city. At the close of the war, she received honorable decorations of the Golden Cross of Baden and the Prussian Iron Cross. She then came home to start her work on initiating an American Red Cross. (Inventory #: 20906)
$10,000.00 add to cart Available from Raab Collection
Share this item