Robert F. Kennedy, Newly Elected U.S. Senator from New York, Purchases a Residence and Registers to Vote in New York City He had not previously owned a home in New York, but had just bought a condominium in Manhattan to make it his official residence 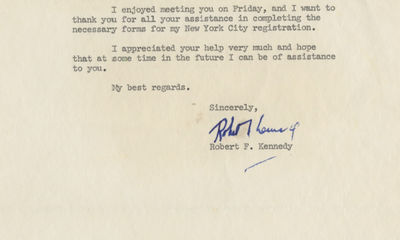 21/06/1965. Robert Kennedy This letter comes to us from the descendants of the recipient, and it has not been previously offered for saleOn November 22, 1963, President John F. Kennedy was assassinated in Dallas. His brother Robert continued to serve as attorney general until he resigned in September 1964. The months after his brother’s death were a desperate time for Robert. He was stooped by grief and spent long periods staring out windows or walking in the woods. He had presided over the Department of Justice for 44 months and had emerged as a statesman of the law, striving to improve the lot of people throughout the country. He had also taken actions designed to further the civil rights movement. Learning on May 20, 1961, that a hostile mob threatened Martin Luther King, Jr., and about 1,200 of his supporters in Montgomery, Alabama, Kennedy sent 400 federal marshals to protect them. When Gov. George Wallace stood in the doorway at the University of Alabama, he nationalized the Alabama national guard to desegregate the school. In subsequent racial crises he used long telephone sessions to work out the strategies of peace officers in the South. He also led a tough and imaginative drive against organized crime. One of his proudest achievements was assembling the evidence that convicted Jimmy Hoffa. On Kennedy’s departure from the Department of Justice, The New York Times, which had criticized his appointment three years earlier, said editorially, “He named excellent men to most key posts, put new vigor into protecting civil rights through administrative action, played a pivotal role in shaping the most comprehensive civil rights law in this century…Mr. Kennedy has done much to elevate the standard.”On August 25, 1964, Kennedy leased a house in Glen Cove, Long Island, to establish residence in New York. That day, he announced his candidacy for the United States Senate from New York. Having not lived in New York for years, he was criticized as a carpetbagger. He stated, “I recognize that some voters have misgivings about considering a man for high office who has left the state and who has only recently returned. I understand this, but it is appropriate to point out that my candidacy would wholly fulfill the requirements for membership in the United States Senate which were set forth after solemn consideration by the men who drafted the Constitution of the State of New York as well as by those who drafted the Constitution of the United States. There may be some who believe that where a candidate voted in the past is more important than his capacity to serve the state. I cannot in fairness ask them to vote for me, even though my Mother and Father have had a home in New York since 1926 and I attended New York schools for six years before my Father became Ambassador to Great Britain, and I have once again established residence in this state. But I do not base my candidacy on these connections. I base it on the conviction that my experience and my record equip me to understand New York's problems and to do something about them. I base it on the' fact that the greatest state in the union must play a leading role at the federal level in solving these problems. And I wish to play a part in that effort.RFK was elected in November 1964, and sworn in as a U.S. Senator on January 3, 1965. In the Senate, Kennedy opposed U.S. involvement in the Vietnam War and raised awareness of poverty by sponsoring legislation designed to lure private business to blighted communities. He was an advocate for issues related to human rights and social justice by traveling abroad to Eastern Europe, Latin America, and South Africa, and formed working relationships with Martin Luther King, and labor leaders Cesar Chavez, and Walter Reuther. In 1968 he would run for president.But Glen Cove was not where Kennedy would seek to make his principal residence; he wanted to be in New York City, where the action was. The New York Times reported on June 18, 1965, that “Senator Robert F. Kennedy has contracted to buy a five-room cooperative apartment overlooking the East River at 860 United Nations Plaza.” Having purchased the residence, he Immediately registered to vote there, making that his official address. Aiding Kennedy in the registration was James Siket, Executive Director of the New York City Board of elections. The registration complete, RFK wrote to thank Siket.Typed letter signed, on his U.S. Senate letterhead, Washington, June 21, 1965. “I enjoyed meeting you on Friday, and I want to thank you for all your assistance in completing the necessary forms for my New York City registration. I appreciated your help very much and hope that at some time in the future, I can be of assistance to you.”This letter comes to us from the descendants of the recipient, and it has not been previously offered for sale. (Inventory #: 21137)
$5,000.00 add to cart Available from Raab Collection
Share this item