Clara Barton and the International Red Cross Conference of 1892, With the Official Commitment of the United States Government to Participate, and the Issues to Be Brought Before the Organization for Consideration The commitment is contained in the original letter of the Secretary of State enlisting Barton’s aid; there are also 10 pages detailing the measures to be discussed by the conference 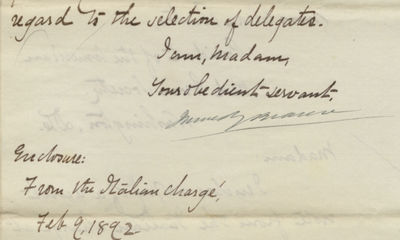 1892. Clara Barton As the Red Cross movement gained recognition and strength, it held international conferences where national delegations met to discuss their experiences and plans, update methods, and add new programs. In 1892 there was an International Red Cross Conference held in Rome, one that would see the beginnings of the Red Cross Youth Movement, and also lead to the Geneva Convention on Maritime Warfare and the famed Geneva Convention on Prisoners of War.Here is the story of the 1892 conference, detailing the issues before the organization that it wished to address, as Barton saw it, and participated. Barton received a letter dated February 9, 1892, from Secretary of State James G. Blaine, informing her that the United States government has been invited to, and will, send delegates to an International Red Cross Conference and asking for her assistance. “Madam, I enclose a recent note from the Italian chargé d'affaires at this Capital inviting this government to be represented at the 5th International Conference of the Red Cross to be held at Rome on April 21 next. The Department is happy to receive any suggestions you may be disposed to make in regarding to the selection of delegates.” The letter, in Blaine’s hand, indicates that it encloses the invitation from the Italians.Included with this, in a clerical hand apparently from the State Department, is the ten page long translation of the invitation, also dated February 9, 1892, from the Italian legation, and addressed to the Secretary of State. “The Italian Central Committee of the Red Cross has just decided to invite the governments of the signatory powers of the Convention of Geneva to take part in the labors of the 5th International Conference of the Red Cross, which will assemble on the 21st of April next… I have the honor to acquaint you how much the government of His Majesty would esteem the representation of the United States government at the aforesaid conference…”Next follows the agenda provided by the Italians to all the signatories. It is entitled: “The accompanying memorandum of questions which the Central Committees have, up to the present, proposed to be submitted to the examination of the Congress.” These questions included: “ 1. Instruction of volunteer nurses and bearers of the wounded in time of peace in order to have them in readiness for the Red Cross service at the breaking out of a war, according to the experiment made in Germany in recent years. 2. Suitable organization of barrack hospitals…3. What have been the measures adopted in the different states which have adhered to the Convention of Geneva… With a view to prevent the abuse of the Red Cross emblems. 4. That measures should be taken to instruct the young in primary and secondary schools in their duties to be performed and ends to be attained by the Red Cross. 5. What would be the most efficacious measures to take in order to regulate the official and semi official relations between the Central Committees and their governments in order that the institution of the Red Cross may find it self able to fulfill the high mission proposed by it in its formation? 6. How the Central Committees understand the constitution and operation of the ambulance corps of the Red Cross and its operation in time of war…7. The organization of the system of sterilization replacing the antiseptic dressing of wounds delivered as a proposition by the Conference. Based upon the latest experiences, the method of sterilization has required a renowned justified by all the experiments, surpassing the old antiseptic system…8. In what way could the societies of the Red Cross in time of peace attend military maneuvers? It would be an infinite advantage…9. Use of the Augusta fund [funds that were provided by the Empress Augusta of Germany]. 10. Maritime activity of the Red Cross. 11. Is it desirable that each society of the Red Cross should communicate to the International Committee what it has done and what it has obtained from the government of its country…?” 12. The manner and degree in which the societies of the Red Cross could send succor for wars in a distance and beyond the sea, even if their nations were not engaged in them. 13. Uniformity of title for the national societies for aid to the wounded recognized by the International Committee of Geneva… Is it desirable that any new organization should be recognized by the International Committee when it does not bear the invariable title of Society of the Red Cross?… 14. Measures to be taken to propagate the ideas of the Red Cross in all classes of society. 15. Means to ensure the free carriage of succors in kind, in time of war from the Red Cross societies from neutral countries to the countries of the belligerents…16. Necessity for measures of principle and organic measures to ensure an asylum insalubrious localities and near to battlefield for the sick and wounded who cannot be removed. Maintenance of the sick and wounded in the sanitary organizations…”This is an extraordinary memento of the early years of the Red Cross, from Barton's personal papers. (Inventory #: 20912)
$2,500.00 add to cart Available from Raab Collection
Share this item