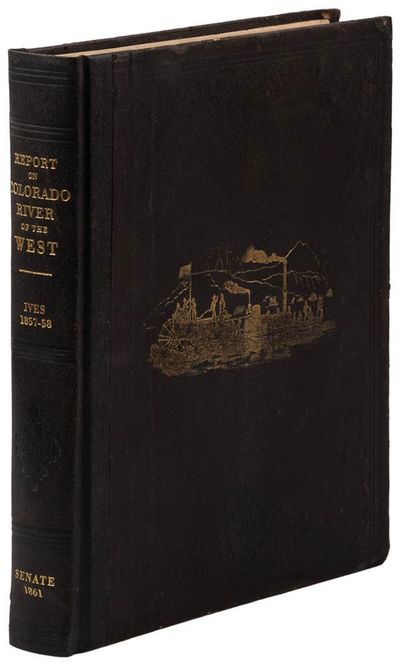 by Ives, Joseph C.
Washington: Government Printing Office, 1861. 29x21.5 cm (quarto), five parts in one volume: pp. [1-5] 6 [7-17] 18 [19] 20-23 [24-25] 26-131 [132]; [1-7] 8-14 [15-16: blank]; [1-5] 6-7 [8-9] 10-154 [155-160]; [1-5] 6-30 [31-32: blank]; [1-5] 6] [7-8: blank] [1-3] 4-5 [6] 7-31 [32], 25 inserted plates with engraved or lithographed illustrations, 8 in color, 1 inserted profile, 2 inserted maps (folded), 8 panoramic views (folded), 41 woodcut engravings in the text, plus 27 woodcut illustrations and diagrams in the geology section, original pictorial pebbled black cloth, front and spine panels stamped in gold and blind, rear panel stamped in blind. First edition, Senate issue. The first printing of the text of Ives's complete report (preceded by an 1858 preliminary report), which William Goetzmann calls "The best by far of these individual reports ... It is a long, carefully written journal, consciously literary but with a maximum amount of attention to scientific observation. John Strong Newberry's geological report, which accompanied Ives's narrative, is one of the best of the government geological reports" (Wagner, Camp, Becker). "The expedition on the river was largely a waste of money, but the report is one of the most desirable books in the Colorado River field, for it is the first that deals specifically with the river itself ... Ives and his staff added immensely to knowledge of the lower canyons, especially those now occupied by Hoover Dam and Lake Mead" (Farquhar). The lithographs after illustrations by Heinrich Balduin Möllhausen (1825-1905) are stunning. "In 1857 Lieutenant Joseph Christmas Ives invited Möllhausen to join his expedition to test the navigability of the Colorado River and investigate the Grand Canyon. He accepted the offer and was appointed 'artist and collector in natural history.' The exploring party assembled in San Francisco in October 1857 and then proceeded to Fort Yuma on the Colorado River. From there they traveled up the Colorado some 530 miles, first in a small steamer built specifically for the trip; and when the river became too shallow, they continued on foot to the Grand Canyon. After exploring the Grand Canyon, they left the river and headed east, reaching Fort Defiance where the expedition ended on May 23, 1858. Results of their exploration were presented by Ives in REPORT UPON THE COLORADO RIVER OF THE WEST (1861). The illustrations prepared by Möllhausen for the Ives report were some of the first views of the Grand Canyon ever published. Möllhausen left America for the last time, returning to Germany on September 1, 1858. Using his sketchbooks from the expedition he painted watercolor illustrations that he sent back to Washington for use in Ives' report" (Wikipedia). For a biographical sketch of Möllhausen, explorer, artist and novelist, "The German Cooper," see DAB. Farquhar, The Books of the Colorado River & the Grand Canyon 21. Goetzmann, pp. 379-94. Howes I92. Sabin 35308. Wagner, Camp and Becker (1982) 375. Wheat Transmississippi 4, pp. 98-101. Rebacked, wear and rubbing to extremities, some internal spotting and foxing, some foxing to plates, mostly to margins, stain to lower margin of inserted profile, frontispiece and title leaf, some wear along lower edge of one of the folded panoramic views, margins of several plates foxed, some offset on text pages facing the plates, stains and foxing to pages 128 and 129 and the margins of the plate facing page 128, overall a tight, good copy with sharp impressions of the lithographed images by Möllhausen. (#167037) (Inventory #: 167037)
$1,250.00 add to cart or Buy Direct from L.W. Currey
Share this item
L.W. Currey Inc.
Offered by