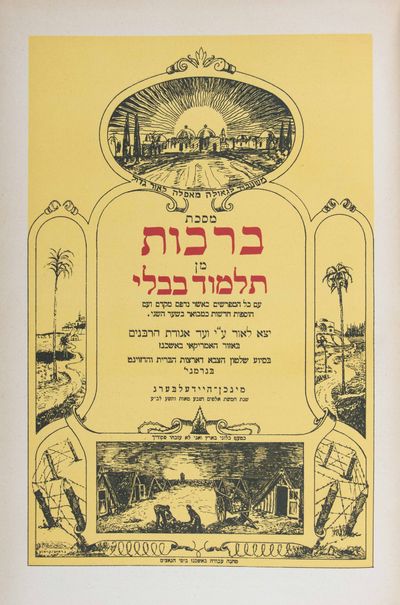 by Snieg, Samuel Abba and Samuel Jacob Rose, eds
Heidelberg/Munich: Rabbinic Organization in the American Sector / American Military Command / American Jewish Joint Distribution Committee in Germany, 1948. First edition. Hardcover. G to very good condition. 19 volumes, complete. Folio. 1/650 (unnumbered) Rebacked in brown half leather over retained original textured brown cloth boards with title of each Masekhet (tractate) stamped in gilt to spine and front cover. Five raised bands with tooling blind-stamped to head and tail compartments of spines. Also known as the 'US Army Talmud,' the Shas was off-set printed from a set purchased in New York and sent to Germany, where using a photomechanical process, they were able to create the printing plates for this edition. After it was published, Rabbi Joseph B. Soloveitchik noted that they had acquired and used the Second Romm edition that was printed in Vilna in 1897 (rather than Romm's more common first printing from 1886).

The illustrated title page printed on yellow paper depicts a Nazi concentration camp surrounded by barbed wire with men in the foreground lifting a corpse to be put in a cart (at right). Above this, at both edges, are palm trees in a middle eastern landscape. At top of the title page is a framed cartouche depicting the sun rising and shining on the New Jerusalem. Underneath the cartouche is a legend that translates as "From Bondage to Freedom, from Darkness to a Great Light." The art was created by a survivor of the Kaufering "arbieitslager" whose triangular wooden huts are depicted in the bottom section of the page. The artist, Grisha Ronsenkanz, was active in the DP camps, and later emigrated to Miami, where he taught both Hebrew and Jewish studies.

In Hebrew and Aramaic. Volumes one through four with age-toned book blocks, more pronounced in first volume (Berakhot), to a lesser extent in volumes 2 (Shabbat), 3 (Eruvin) and 4 (Pesachim). Else with light wear of bindings. along edges. Scarce. The first complete Talmud published in Europe after W.W.II, produced in Heidelberg under the aegis of the U.S. Army in Heidelberg. At the end of World War II, Jewish survivors and residents of the DP camps had few or no books. Consequently Rabbis Sneig and Rose, survivors of Dachau, took upon themselves the enormous task organizing the printing of a complete set of the Talmud. Many necessary resources, such as paper and ink, were in short supply. Rabbis Sneig and Rose appealed to Rabbi Philip S. Bernstein, the special Jewish Advisor to the U.S. Army in Germany, for government assistance. With the aid of Rabbi Bernstein and Rabbi Abraham Klausner, Rabbis Sneig and Rose, were able to obtain the needed resources and published the complete Talmud, which they dedicated to the U.S. Army. Printing took place at the Carl Winter Press in Heidelberg in 1948. It is unclear how many copies were produced, however it is believed that no more than 650 were printed before the paper supply ran out. Complete 19-volume sets of the Survivors Talmud are quite scarce.

Jacqueline (Jackie) Ben-Efraim, online lecture "The Survivors' Talmud" May 2, 2021 (hosted by the Jewish Study Center). Special Collections Librarian at the American Jewish University in Los Angeles, Jackie, did groundbreaking research to identify the long-unknown identity of the artist who created the title page for this edition, as well as the two volumes known as the St. Ottilien Talmud, published in Munich in 1946.

Ben Efraim is now working on a worldwide census of extent copies and is interested in being contacted by all institutions and private individuals who posses separate volumes or the complete set.

Our book description, and our ad in the Summer 2021 issue of the Jewish Review of Books, draws significantly on Ben-Efraim's research and insights, with her kind permission. (Inventory #: 48268)
$12,000.00 add to cart or Buy Direct from
Eric Chaim Kline Bookseller
Share this item