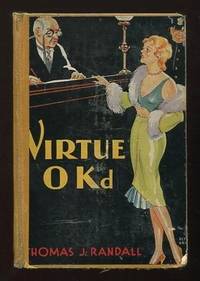 by Randall, Thomas J.
New York: The Macaulay Company. Fair. (c.1931). First Edition. Hardcover. (no dust jacket, but front panel glued to book's front cover) [ex-rental library book (Readers Rental Library, Denver), well-worn at all edges and extremities, but binding still firm and hinges intact, hence a decent reading copy, but no more than that]. "This is the story of Molly O'Hare, daughter of a Tenth Avenue beer truck driver, and Jerry, absolute beer czar of the city. Although she was widely known as Jerry's woman, Molly did not even realize that Jerry loved her. He made her the star in his night club, gave her a luxurious Park Avenue setting, and kept her guarded like a visiting queen. Nevertheless Molly's fancy was for a glittering young playboy with millions, and plenty of family prestige." This is all complicated by a gang war, however, as part of which a rival racketeer orders his boys to "get Jerry's woman." She's hounded by the vice squad and ends up in a reformatory, and in the end she "finally chooses between Park Avenue and Tenth Avenue for her lover." (Unfortunately the manner in which the dust jacket was trimmed and then affixed to the front cover resulted in the partial cutting-off of the illustrator's name, which is Pet__ Oru__.) . (Inventory #: 25677)
$50.00 add to cart Available from ReadInk
Share this item
ReadInk
Offered by

Do I Hear a Waltz?