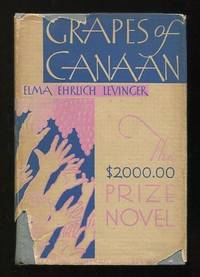 by Levinger, Elma Ehrlich
Boston: The Stratford Company. Very Good in Fair dj. (c.1931). First Edition. Hardcover. [front hinge starting, a touch of fraying to cloth at base of spine, no other significant wear; the jacket is soiled and age-toned, with a large chip (about 1.5" deep) at the lower front hinge, various other minor chipping at top and bottom edges of front, slight paper loss at top of spine, a couple of other short closed tears]. Jacket-blurbed as "The Jewish 'Main Street'," -- and given a little extra juice from having been named "The $2,000 Prize Novel" by its publisher -- this "trenchant study of the Jew in America by one who knows the American scene, in its sordidness and in its grandeur" centers around a "humble Jewish peddler, Abraham Kupper, who rises from poverty to the position of millionaire and community boss." The Chicago-born author (1887-1958) was a teacher, a prolific author, and an active participant in numerous Jewish women's and youth organizations. Her 30+ books and plays were primarily aimed at educating women and young people about Jewish history and traditions (e.g. "The Story of the Jew for Young People," co-written with her husband, a rabbi, and "With the Jewish Child in Home and Synagogue"); she also penned a number of biographies of prominent Jewish individuals, and at one time edited a magazine entitled "Jewish Child." This novel, obviously her bid to make an impact as a mainstream novelist, seems to have missed its mark -- less a reflection on its quality, I suspect, than on the perception that it was targeted at a niche readership; as a reviewer for the Sacramento Bee put it, rather unkindly, "Most of us Gentiles will prefer Potash and Perlmutter." That brush-off notwithstanding, the book received generally positive notices in the hinterlands -- but the New York Times neglected to review it, and its 1935 sequel, "Bread for Beauty," was published only in England, and Mrs. Levinger apparently abandoned the writing of "serious" fiction thereafter. . (Inventory #: 26748)
$250.00 add to cart Available from ReadInk
Share this item
ReadInk
Offered by