An essay towards solving a problem in the Doctrine of Chances 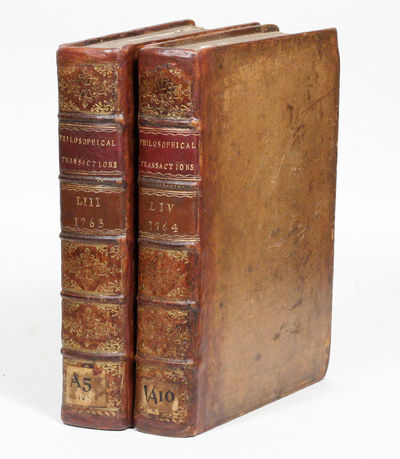 by BAYES, THOMAS
London: L. Davis and C. Reymers, 1764. First edition. Contemporary calf. Very Good. FIRST EDITION OF THOMAS BAYES'S EXTREMELY INFLUENTIAL WORK ON THE CONCEPT OF "INVERSE PROBABILITY", THE BASIS OF MODERN STATISTICAL INFERENCE. 'Bayes, a Nonconformist minister, published only two works during his lifetime: Divine Benefits (1731), a religious treatise; and Introduction to the Doctrine of Fluxions (1736), in which he responded to Bishop Berkeley's attack on the logical foundations of Newton's calculus. For the latter work he was elected a member of the Royal Society in 1742. In 1763, two years after Bayes's death, Richard Price, a fellow Non­conformist minister, economist, and actuary to whom Bayes had bequeathed his papers, found Bayes's Essay and submitted it to the Royal Society for publication. The arguments in Bayes's paper were adopted by Laplace, who saw in them the basis for statistical inference; they were later challenged by George Boole in his Laws of Thought.

"Bayes's Essay contains the first statement of Bayes's Theorem for calculating 'inverse probabilities', which forms the basis for methods of decision analysis, statistical learning machines, and Bayesian networks. Bayesian networks are complex diagrams that organise the body of knowledge in any given area by mapping out cause-and­-effect relationships among key variables and encoding them with numbers that represent the extent to which one variable is likely to affect another. Programmed into computers, these systems can automatically generate optimal predictions or decisions even when key pieces of information are missing. Bayesian or subjective decision theory is arguably the most comprehensive theory of decision-making; however, until the late 1980s, it had little impact due to the stupefying complexity of the mathematics involved. The rapid advances in computing power and the development of key mathematical equations during the late 1980s and early 1990s made it possible to compute Bayesian networks with enough variables to be useful in practical applications" (Hook & Norman).

With the advent of the Internet, Bayesian networks have been applied extensively to fundamental search structures. "Search giant Google and Autonomy, a company that sells information retrieval tools, both employ Bayesian principles to provide likely (but technically never exact) results to data searches. Researchers are also using Bayesian models to determine correlations between specific symptoms and diseases, create personal robots, and develop artificially intelligent devices that 'think' by doing what data and experience tell them to do" (Michael Kanellos, "18th-century theory is new force in computing").

Only one other mathematical contribution of Bayes has come down to us, which appears on pp. 269-71. It is referred to by Price on p. 401 of the Essay in connection with the evaluation of factorials needed for the second rule. In this paper Bayes considers the series for log n! given by Stirling and de Moivre. He makes the important observation that "at length the subsequent terms of this series are greater than the preceding ones, and increase in infinitum, and therefore the whole series can have no ultimate value whatsoever" (p. 270). This was contrary to de Moivre's view that the series "converged, but slowly". Bayes was, in fact, the first to appreciate the asymptotic character of Stirling's series: there is now an extensive theory of such 'asymptotic series'. The present volume also contains a paper by Ferguson on the anticipated 1769 transit of Venus, which prompted Captain Cook's voyage to Tahiti, and led to the first accurate measurement of the sun's distance, illustrated with a large detailed folding engraved plate.

ALSO WITH: "A Demonstration of the Second Rule in the Essay towards the Solution of a Problem in the Doctrine of Chances, published in the Philosophical Transactions, Vol. LIII" - a long paper (pp.296- 325) by Richard Price exploring Bayes's Second Rule, published in Vol. LIV (included in a full separate volume).

AN OUTSTANDING COPY - THE NICEST WE'VE HAD - OF BAYES'S IMPORTANT WORK. (Inventory #: 2435)
$11,000.00 add to cart or Buy Direct from
Manhattan Rare Book Company
Share this item