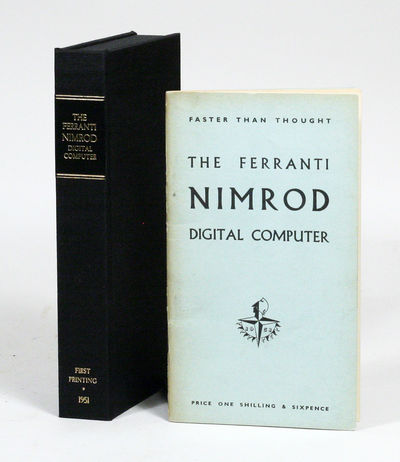 by FERRANTI; NIMROD; [COMPUTER HISTORY]
Hollinwood/Lancs: Ferranti, Ltd, 1951. First edition. Very Good. FIRST EDITION IN ORIGINAL WRAPPERS OF THE MANUAL FOR ONE OF THE FIRST VIDEO GAMES. VERY POSSIBLY THE FIRST COMPUTER GAME MANUAL. Although they were "keen to be involved" in the 1951 Festival of Britain, electrical engineering firm and computing pioneer Ferranti was still without an exhibit by late 1950. John Bennet, an employee of the firm, stepped up and suggested the construction of a machine that could play Nim, a matchstick game in which players compete to force a final move.

The Nimrod is considered to be the first or second computer game ever constructed, depending on how one defines the term, and is certainly the first to be constructed and played outside of North America. It was inspired by the Nimatron, an "electro-mechanical machine exhibited at the 1940 World's Fair in New York City" that also played Nim (Donovan), which isn't typically considered a computer, and followed only Toronto's Bertie the Brain, built in 1950, which played tic-tac-toe.

The manual, which includes a technical description of the computer appears to be the first of its kind, as we can locate no records of any user manuals or pamphlets for the Nimatron or Bertie the Brain, both of which were also presented and played at public festivals.

The game was tremendously well received, both at Festival of Britain and at the Berlin Industrial Show in the same year. It is reported that it drew politicians and academics, notably including Alan Turing, who is rumored to have been one of the few to beat it!

London : Thames and Hudson , 1975
(click for more details about Interviews with Francis Bacon)