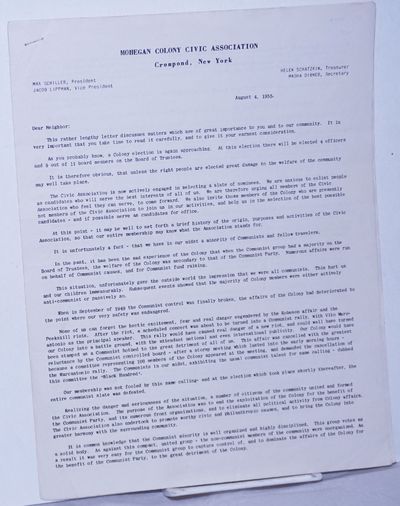 by Schiller, Max, President
Crompond, New York: Mohegan Colony Civic Association, 1955. Three 8.5x11 inch sheets, printed one side only, stapled together at upper left, fold-creased, a few small stains on rear sheet else very good condition with a few handwritten corrections. Signed by Schiller. Letter to members of the Colony on the upcoming Colony elections, inviting them to consider running and to join the Civic Association if they are not yet members. The Civic Association was formed after the Peekskill riots to "end the exploitation of the Colony for the benefit of the Communist Party," which had previously had a majority on the Colony's Board of Trustees. (Inventory #: 263692)
$125.00 add to cart or Buy Direct from Bolerium Books
Share this item