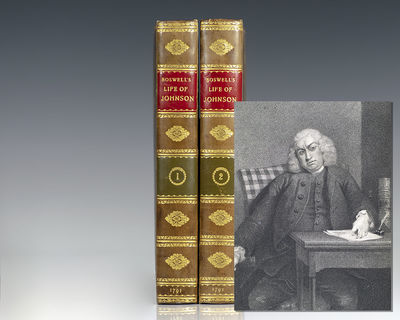 by Boswell, James
London: Printed by Henry Baldwin, for Charles Dilly, in The Poultry, 1791. First edition, first issue of both volumes of the most celebrated biography in the English language, which was published on May 16, 1791 in a print run of only 1,750 copies. Quarto, bound in full calf, gilt titles to the spine, morocco spine labels. Frontispiece portrait of Samuel Johnson, engraved by J. Heath after the Sir Joshua Reynolds (1756) painting. In very good condition. An excellent example of this landmark work. Boswell excelled in insight into human nature and in ability to dramatize a situation... It was a crucial part of Boswell's magic to give significance and vitality to the apparently trivial; it is this trait, together with his notable accuracy and unparalleled completeness of portraiture, that made him... 'the Shakespeare of biographers" (Baugh et al., 1065-66). "One of Western literature's most germinal achievements: unprecedented in its time in its depth of research and its extensive use of private correspondence and recorded conversation..." (Gordon Turnbull, Oxford DNB). (Inventory #: 124524)
$15,000.00 add to cart or Buy Direct from
Raptis Rare Books
Share this item