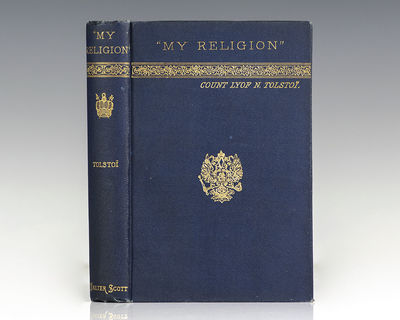 by Tolstoi, Count L. N. [Leo Tolstoy]
London: Walter Scott, 1889. First English edition of Tolstoy's fervent attack on the church, the sequel to A Confession in which he outlines his profound spiritual awakening. Octavo, original blue cloth with gilt titles and tooling to the spine and front panel. Translated from the French by Huntington Smith. In near fine condition. A superior example, uncommon in this condition. Generally regarded as one of the greatest writers of all time, Leo Tolstoy is best known for his novels War and Peace (1869) and Anna Karenina (1877). Tolstoy's fiction includes dozens of short stories and several novellas such as The Death of Ivan Ilyich, Family Happiness, and Hadji Murad. Tolstoy had a profound moral crisis and spiritual awakening in the 1870's which he outlined in his work, A Confession. My Religion further develops the initial ideas laid out in A Confession and develops his attack on the church, which he accuses of hiding the true meaning of Jesus' teachings. (Inventory #: 124058)
$600.00 add to cart or Buy Direct from
Raptis Rare Books
Share this item