Custer's Fall: The Indian Side of the Story [*SIGNED*] 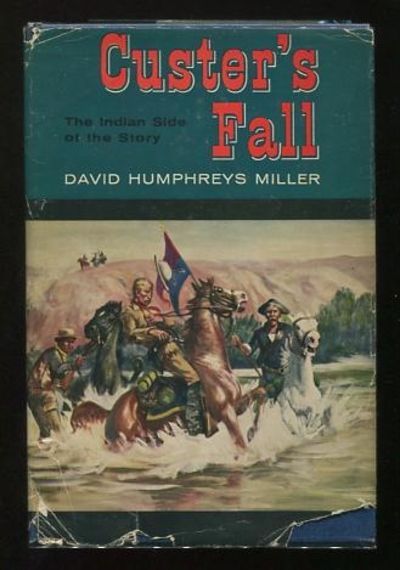 by Miller, David Humphreys
New York: Duell, Sloan and Pearce. Very Good+ in Good dj. 1957. 2nd printing. Hardcover. [a good sound book with light wear to the extremities, tiny rip in cloth at top of spine; jacket extensively chipped along bottom and top edges, horizontal tear across bottom of spine panel about 1.5" from the bottom (pen and ink drawings, endpaper maps) INSCRIBED and SIGNED by the author on the front endpaper: "For Hal / a great guy and a / top agent / all the best / David Humphreys Miller." An invaluable work of American history, this is "the true story, which has never before been told, of the Battle of the Little Big Horn," as seen from the winner's side. The author began his research in 1935, at the age of sixteen, and eventually "interviewed seventy-one Indians who actually participated in the Battle," including the famed Ogalala Sioux medicine man Black Elk, who (we are informed in the jacket blurb) "adopted [the author] as his son in 1939." Also an artist, Miller notably painted a series of 72 portraits of survivors of the Custer engagement. In order to facilitate his research and earn the trust of the men he interviewed, the author learned half a dozen Native American languages. In a 1971 article he recalled: "I questioned them in their own languages and found, with very few exceptions, that none of them had ever before told their stories to a white man or had their portraits painted. It was my purpose to tax their memories. Whenever possible, I arranged joint conferences with several survivors, who often reminded each other of various details that might otherwise have been overlooked." Miller's extensive knowledge of Native American life and history was tapped several times by Hollywood: he served as a technical advisor on the Cinerama epic HOW THE WEST WAS ONE, John Ford's CHEYENNE AUTUMN, and the 1960s TV series DANIEL BOONE. Signed by Author . (Inventory #: 26762)
$75.00 add to cart Available from ReadInk
Share this item
ReadInk
Offered by