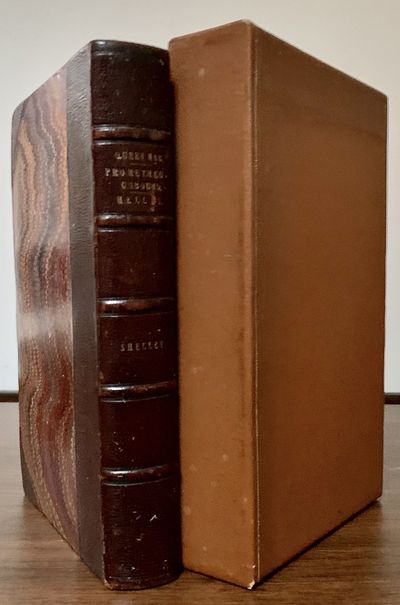 by Shelley, Percy Bysshe
London: John Brooks, C and J Ollier, Charles And James Ollier, 1822. First edition. Hardcover. Period half brown morocco and marbled boards housed in matching brown modern slipcase. Very good. 22 x 14 cm. All are First Editions. In printed order are "Queen Mab "(1829). 89 pages. NOTES to Queen Mab in French, Latin and Greek are printed verbatim. 92 pages. "Prometheus Unbound." With "Other Poems," 1820. 220 pages. Prometheus Unbound with some old and neat corrections in ink to some margins, titles of Queen Mab and Prometheus lightly toned, Hellas, 60 pages, with final leaf containing "Written on Hearing the News of the Death of Napoleon." Hellas clean throughout and appearing to have been rarely (and/or carefully) handled. Hellas was the last work that he would publish before he drowned in the Bay of Spezia just three months later in the same year that celebrates the Greek Proclamation of Independence from the Ottoman Empire, a cause that was strongly championed by the Romantic poets. TINKER 1902. Armorial bookplate of George Merryweather, raised bands, spine lettered in gilt. (Inventory #: 22630)
$4,100.00 add to cart or Buy Direct from
Roy Young Bookseller
Share this item
Roy Young Bookseller, Inc.
Offered by