HISTORY OF THE INDIAN TRIBES OF NORTH AMERICA 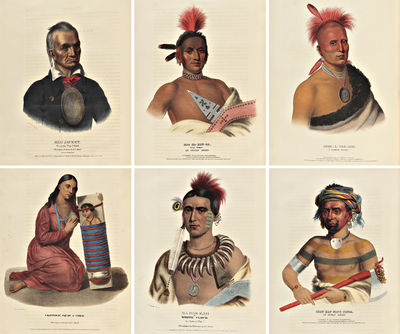 by McKenney, Thomas L., and James Hall
Philadelphia: Edward C. Biddle (Vol. I) and Daniel Rice and James G. Clark (Vols. II-III), 1844. Three volumes. 120 handcolored lithographic plates after Karl Bodmer, Charles Bird King, James Otto Lewis, P. Rindisbacher, and R.M. Sully; drawn on stone by A. Newsam, A. Hoffy, Ralph Trembley, Henry Dacre, and others; printed and colored by J.T. Bowen and others; third volume with two lithographic maps and one table printed recto of one leaf, 17pp. of lithographic facsimile signatures of the original subscribers. Folio. Contemporary dark green half morocco, gilt, spines gilt with raised bands, yellow glazed endpapers, a.e.g. Foot of spine renewed on second volume, neat repairs to joints. Very good. "One of the most costly and important [works] ever published on the American Indians" (Field), "a landmark in American culture" (Horan), and an invaluable contemporary record of a vanished way of life, including some of the greatest American handcolored lithographs of the 19th century. First edition, first issue of volumes I and III, second issue of volume II. After six years as superintendent of Indian Trade, Thomas McKenney had become concerned for the survival of the Western tribes. He had observed unscrupulous individuals taking advantage of the American Indian for profit, and his vocal warnings about their future prompted his appointment by President Monroe to the Office of Indian Affairs. As first director, McKenney was to improve the administration of Indian programs in various government offices. His first trip was during the summer of 1826 to the Lake Superior area for a treaty with the Chippewa, opening mineral rights on their land. In 1827 he journeyed west again for a treaty with the Chippewa, Menominee, and Winebago in the present state of Michigan. His journeys provided an unparalleled opportunity to become acquainted with American Indian tribes. When President Jackson dismissed him from his government post in 1829, McKenney was able to turn more of his attention to his publishing project. Within a few years he was joined by James Hall, the Illinois journalist, lawyer, state treasurer, and from 1833 a Cincinnati banker, who had written extensively about the West. Both authors, not unlike George Catlin, whom they tried to enlist in their publishing enterprise, saw their book as a way of preserving an accurate visual record of a rapidly disappearing culture. The text, which was written by Hall based on information supplied by McKenney, takes the form of a series of biographies of leading figures amongst the Indian nations, followed by a general history of the North American Indians. The work is now famous for its color plate portraits of the chiefs, warriors, and squaws of the various tribes, faithful copies of original oils by Charles Bird King painted from life in his studio in Washington (McKenney commissioned him to record the visiting Indian delegates), or worked up by King from the watercolors of the young frontier artist, James Otto Lewis. All but four of the original paintings were destroyed in the disastrous Smithsonian fire of 1865, so their appearance in this work preserves what is probably the best likeness of many of the most prominent Indian leaders of the early 19th century. Numbered among King's sitters were Sequoyah, Red Jacket, Major Ridge, Cornplanter, and Osceola. This was the most elaborate plate book produced in the United States to date, and its publishing history is extremely complex. The titlepages give an indication of issue and are relatively simple: volume I, first issue was by Edward C. Biddle, and is dated 1836 or more usually 1837; the second issue Frederick W. Greenough with the date 1838; and the third issue is by Daniel Rice & James G. Clark dated 1842. Volume II, first issue is by Frederick W. Greenough and dated 1838, and the second issue is by Rice & Clark and dated 1842. Volume III, first issue is by Daniel Rice & James G. Clark and dated 1844. BAL 6934. BENNETT, p.79. FIELD 992. HOWES M129, "b." LIPPERHEIDE Mc4. REESE STAMPED WITH A NATIONAL CHARACTER 24. SABIN 43410a. SERVIES 2150. REESE, BEST OF THE WEST 68. (Inventory #: WRCAM37985N)
$145,000.00 add to cart or Buy Direct from
William Reese Co. - Americana
Share this item

ARTICLES OF THE UNION FIRE COMPANY, IN THE TOWN OF ST. JOHN, IN ANTIGUA. THE THIRTEENTH DAY OF SEPTEMBER, IN THE YEAR OF OUR LORD 1756 [caption title]

[Antigua 1756
(click for more details about ARTICLES OF THE UNION FIRE COMPANY, IN THE TOWN OF ST. JOHN, IN ANTIGUA. THE THIRTEENTH DAY OF SEPTEMBER, IN THE YEAR OF OUR LORD 1756 [caption title])
View all from this seller>