Orpheus Britannicus. A Collection of All The Choicest Songs for One, Two, and Three Voices .. Together, With such Symphonies for Violins or Flutes, As were by Him design'd for any of them: And A Through-Bass to each Song; Figur'd for the Organ, Harpsichord, or Theorbo-Lute. All which are placed in their several Keys according to the Order of the G 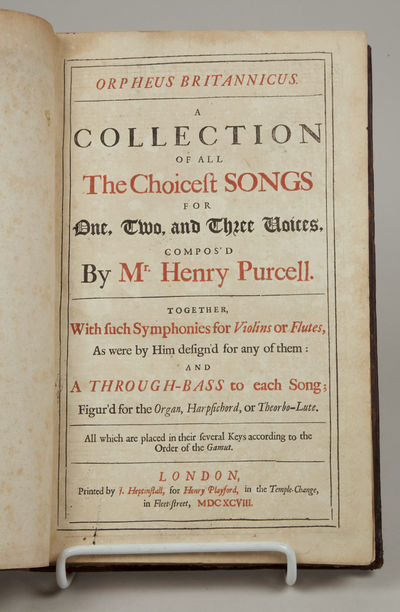 Contains a total of 81 songs by Purcell.

"Purcell was a prolific contributor to all the main genres of secular vocal music current in 17th-century England. He has always been particularly admired as a song composer. Generations of English musicians got to know his music from the two posthumous song volumes Orpheus Britannicus ... and Henry Playford wrote in the preface to the first volume that he had 'a peculiar Genius to express the energy of English Words, whereby he mov'd the Passions of all his Auditors', while Henry Hall added in a poem that he 'Each Syllable first weigh'd, or short, or long, / That it might too be Sense, as well as Song'." Peter Holman et al. in Grove Music Online. (Inventory #: 36257)
$2,200.00 add to cart or Buy Direct from
J. & J. Lubrano Music Antiquarians
Share this item