The Awakening of Lesterville 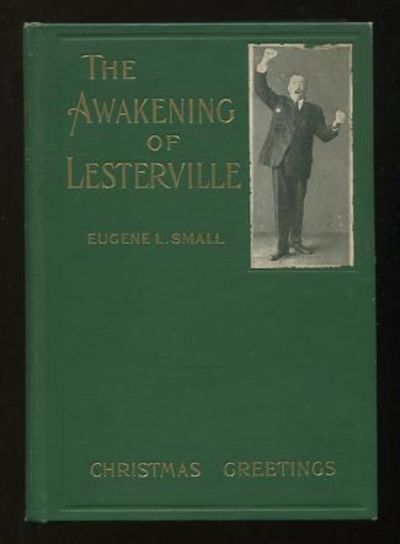 by Small, Eugene L.
Chicago Lawn IL: (Englewood Print Shop). Very Good+. 1918. First Edition. Hardcover. (photographic front cover paper label; no dust jacket) [good sound nice-looking copy, gilt lettering on spine and front cover still strong, light wear to extremities, tiny nicks in edge of front-cover label]. (4 B&W photographs) Novel about a young man from Chicago who takes a job as a high school teacher in a small town in Michigan, where he draws on his background as an ex-seminary student to, first, give an informal course on comparative religion to one of his fellow teachers (a young lady), and later, to effect a unification of the three major religious factions of the town -- the evangelicals, the Methodists, and the Baptists -- into a Church of Common Faith. (And in case you were wondering -- I was, anyway -- there was an actual Lesterville in Michigan at one time (the 1860s), a mill settlement in what is now Berlin Township, in St. Clair County. There is no indication, however, that the town depicted in the book is related in any way to the original locale, which in any case subsequently changed names several times and basically ceased to exist as an officially named place around 1904.) NOTE that in addition to the title and author's name, also stamped in gold lettering on the front cover is "Christmas Greetings"; don't ask me why. I've been unable to uncover any background on this book or its author, except for this tiny but intriguing column blurb, published in the Port Huron (Michigan) Daily Herald in December 1900: "Eugene L. Small, principal of the Stockbridge schools, read a piece of poetry reflecting on the pastor of the village before the school, and his resignation was asked for." (And Stockbridge, if you must know, was about the same distance outside of Detroit -- in a different direction -- as the original Lesterville. You may draw your own conclusions, if any, from all that.) By the way (for the bibliographically-minded): Smith, American Fiction, 1901-1925, S-565. . (Inventory #: 26774)
$75.00 add to cart Available from ReadInk
Share this item
ReadInk
Offered by