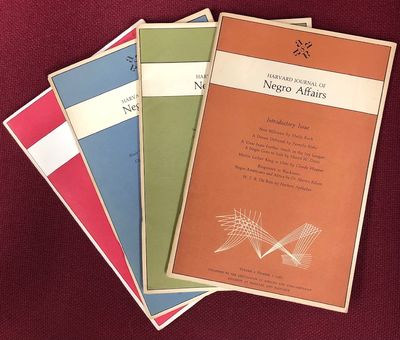 by [Association of African and Afro-American Students at Harvard and Radcliffe]
Four issues: Vol. 1, numbers 1-3; Vol. 2, number 1. 9" x 6". iv, 52; iv, 56, [4]; iv, 66, [2]; 54, [2] pp. In staple-bound paper wraps, first three issues with subscription slip bound in. Wraps show light wear, thumbing and toning. The first four issues of this student-produced publication and the only numbers published with this title (a final issue - Vol 2, no. 2 - was published in 1971 with title "Harvard Journal of Afro-American Affairs"). The contributors range from undergraduate students to notable writers and academics (Conor Cruise O'Brien, Herbert Aptheker), with the first three issues featuring articles on a variety of subjects and the fourth focusing on aspects of the Black Power movement. (Inventory #: 37480)
$150.00 add to cart Available from
Brattle Book Shop
Share this item

Specializing in General Used & Rare. Over 150,000 books on all subjects. We specialize in not specializing.

30 day return guarantee, with full refund including shipping costs for up to 30 days after delivery if an item arrives not as described.
More from this seller

Oxford : Clarendon Press 1906
(click for more details about Primitive and Medieval Japanese Texts)
View all from this seller>