Ugly Duck, and Other Tales 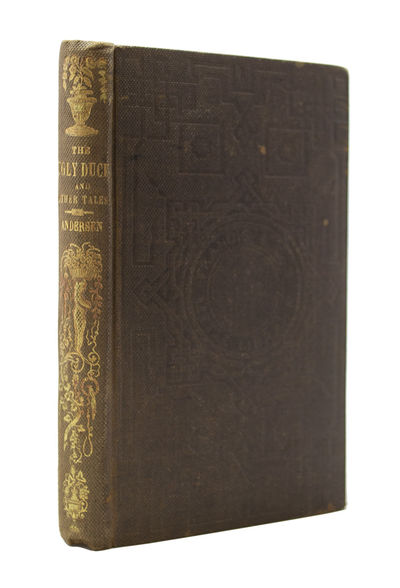 by ANDERSEN, Hans Christian
First American Edition of This Title and an Early American Appearance of ìThe Ugly Duckî ANDERSEN, Hans Christian. The Ugly Duck, and Other Tales. With Illustrations. New York: C.S. Francis & Co, Boston J.H. Francis, 1850. First American Edition of this title and an early American appearance of The Ugly Duck. Twelvemo (5 3/4 x 3 5/8 inches;146 x 90 mm). [1]-159, [1, blank] pp. Part of the ìFrancis & Co. Little Library: For Young Persons of Various Ages.î With half-title and engraved frontispiece. Illustrated with numerous engravings and historiated initials throughout. The first American appearance of the story of The Ugly Duck in in a volume called Wonderful stories for children Second series. New York: Wiley & Putnam,, 1846. We could find no copies of this first appearance at auction nor any copies of this present edition. Publisherís full brown cloth. Board intricately stamped in blind with publisherís imprint stamped in blind as central device. Spine stamped and lettered in gilt, with a gilt figure of a child and floral urns. Spine slightly sunned and a few spots to boards. But gilt is bright. A few spots of foxing throughout and previous ownerís early ink inscription on front free endpaper. Overall an about fine copy of this childrenís book. This volume includes the titles:The Ugly Duck, Top and Ball, The Little Mermaid, The Storks, The Nightingale, The Rose Elf, Holger Danske, The Emperor Frederic Barbarossa and The Dying Child. HBS 68477. $1,350 (Inventory #: 68477)
$1,350.00 add to cart Available from
Heritage Book Shop
Share this item