The Foot Out of the Snare: 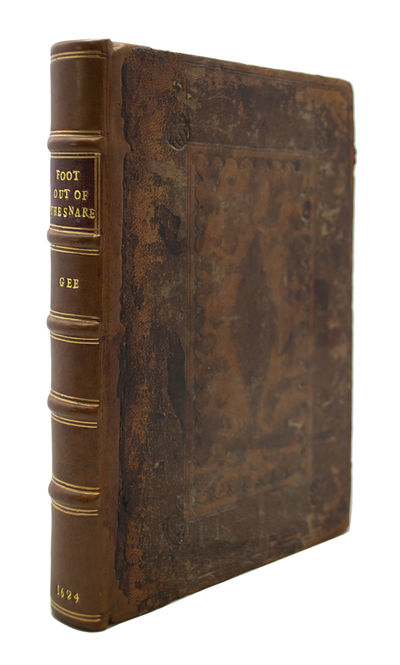 by GEE, John
A John Gee Sammelband with Three Works GEE, John. The Foot Out of the Snare: with a detection of sundry late practices and impostures of the priests and Iesuites in England. Whereunto is added a catalogue of popish bookes lately dispersed in our kingdome. The printers, binders, sellers and dispersers of such bookes. Romish priests and Iesuites resident about London. Popish physicians practising about London. The fourth edition, carrying also a gentle excuse vnto Master Musket for stiling him Iesuite. By Iohn Gee, Master of Arts, of Exon-Colledge in Oxford. London: Printed by H. L[ownes]. for Robert Milbourne, and are to be sold at his shop at the great South-dore of Pauls, 1624. Fourth edition, printed the same year as the first edition. The marginal note on H2v indicates that the first 3 editions (4500 copies) "are vanished in a month or little moreî. Small quarto (6 7/8 x 5 3/8 inches; 175 x 135 mm). [10], 72, 63-116, [30, Catalog] pp. Collates identical to the British Library copy. Title-page printed in red and black. We could find no copy of any 1624 edition at auction in over 40 years. [With]: New shreds of the old snare. Containing the apparitions of two new female ghosts. The copies of diuers letters of late intercourse concerning Romish affaires. Speciall indulgences purchased at Rome, granted to diuers English gentle-beleeuing Catholiques for their ready money. A catalogue of English nunnes of the late transportations within these two or three yeares. By Iohn Gee, Master of Arts, late of Exon-Colledge in Oxford. London: Printed for Robert Mylbourne, 1624. First edition. Small quarto. [6], 121, [1, blank] pp. With initial blank. Collates identical to the BL copy. Title-page in red and black. Being a continuation of his work published in the same year ìThe Foot out of the Snare.î We could find no copies at auction since 1991. At pp. 20-21 are allusions to Hamlet, Midsummer Night's Dream, and a tribute to Shakespeare's co-partner, Richard Burbage. [And]: Hold fast, a sermon preached at Pauls Crosse vpon Sunday being the xxxi. of October, Anno Domini 1624. By Iohn Gee, Master of Arts, late of Exon Colledge in Oxford. London: Printed by A. M[athewes] and I. N[orton] for Robert Mylbourne, and are to be sold at his shop at the great south doore of Pauls, 1624. First edition. Small quarto. [8], 66 pp. With initial blank. Collates identical to the BL copy. We could find no copies of this title at auction. Three works bound together in 18th century calf, rebacked. Boards paneled in blind with floral corner devices. Spine ruled and lettered in gilt. With brown Morocco spine label, lettered in gilt. Top edge dyed brown, the others speckled red. Boards a bit rubbed and scuffed. The first 40 pages of Foot Out of the Snare with marginal worming, but not affecting text and leaf G3 with torn corner, only affecting the page number. New Shreds with title-page trimmed close. Leaf N2with small hole affecting only a few letters on recto and the tailpiece on verso. Overall a very good copy. John Gee was a ìChurch of England clergyman and religious controversialist...On 26 October 1623 he attended a Catholic evensong read by the Jesuit Robert Drury in a gatehouse adjoining the French embassy in Blackfriars. During this event, which became known as the 'fatal vespers', supporting beams gave way and the congregation fell through two floors. About ninety-five people were killed and many were injured. Gee escaped with only a bruised arm but was summoned by George Abbot, the archbishop of Canterbury, to explain his presence at a Catholic gathering...Gee produced his account of the Blackfriars disaster in The Foot out of the Snare (1624). Above all, the tract investigated the 'ensnaring' proselytizing activities of the Catholic priesthood, wishing to expose the underground mission in England between 1621 and 1624. The Foot appeared in four editions in one year and was dedicated to Abbot and the new parliament. Gee claimed that he had inclined to Catholicism for about a year but had never converted. Besides the standard anti-popery polemic and the variety of anecdotes and storiesó for which he ransacked such works as Samuel Harsnett's A Declaration of Egregious Popish Impostures (1603)óGee's work contained historically valuable material: a catalogue of Catholic books printed abroad, and lists of Catholic priests, publishers, printers, and physicians. Though Gee was seen to act as an informer (Westminster archives), it is likely that he was given much information already available to the government. In New Shreds of the Old Snare (1624) and in Hold Fast (1624), his recantation sermon at Paul's Cross, Gee published similar anti-Catholic materials which he had not been able to fit into his first tract.î (Oxford DNB). ESTC S116970, S103057, S115878 HBS 68476. $2,500 (Inventory #: 68476)
$2,500.00 add to cart Available from
Heritage Book Shop
Share this item