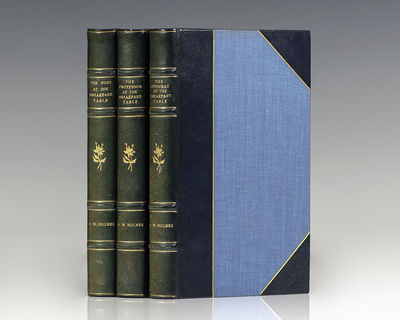 by Holmes, Oliver Wendell
London: J. M. Dent & Co., 1907-1911. Finely bound fully illustrated example of the series that gained Oliver Wendell Holmes international fame. Octavo, three volumes bound in three quarter morocco by Henderson and Bisset with gilt titles and tooling to the spine in five compartments within raised bands, marbled endpapers, top edge gilt. With full page illustrations and vignettes by H.M. Brock throughout including tissue-guarded frontispieces. In near fine condition. A beautiful set. A member of the Fireside poets, American physician, poet, and polymath Oliver Wendell Holmes Sr. was acclaimed by his peers as one of the best writers of the day. His most famous prose works are the "Breakfast-Table" series, which began with The Autocrat of the Breakfast-Table (1858), which first appeared in Atlantic Monthly and later became a three volume series. (Inventory #: 124057)
$750.00 add to cart or Buy Direct from
Raptis Rare Books
Share this item