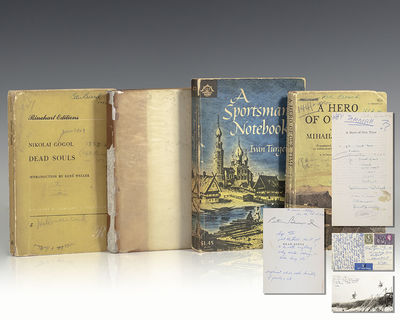 signed first edition
by Beard, Peter
Large archive of early Peter Beard drawings, photographs, annotated books, and letters sent by him to his Yale University college roommate, Jerry Fenton (nicknamed "Tooner"), just as he was starting to explore Africa. The archive includes three large original silver gelatin prints, four autograph letters singed by Beard with accompanying original drawings dated August 1959 through October 1961, three postcards signed by Beard dated January 1961 through May 1962 describing his life on safari, 3 Yale copies of Russian literature texts from Beard's collection all heavily annotated by him and with his ink drawings to the endpapers, and two 5 x 7 original Beard photographs. In near fine condition. A fascinating archive offering an intimate glimpse into Beard's early work. American artist, photographer, and diarist Peter Beard is best known for his photographs of Africa, African animals, and journals, all of which were widely shown and published from the 1970s on. Inspired by Karen Blixen's Out of Africa, Beard traveled to Kenya upon graduation from Yale University and took a position at Tsavo National Park where he photographed and documented the demise of 35,000 elephants and other wildlife, later to become the subject of his first book, The End of the Game. During this time, Beard acquired Hog Ranch, a property near the Ngong Hills adjacent to the coffee farm owned by Blixen, which would become his lifelong home-base in East Africa. Beard befriended and collaborated with many artists, including Andy Warhol, Andrew Wyeth, Francis Bacon, Karen Blixen, Truman Capote, Richard Lindner, and Salvador Dali. His best-known books include Eyelids of Morning: The Mingled Destinies of Crocodiles and Men (1973), Longing for Darkness: Kamante's Tales from Out of Africa (1975,and The End of the Game(1965). (Inventory #: 123481)
$16,000.00 add to cart or Buy Direct from
Raptis Rare Books
Share this item