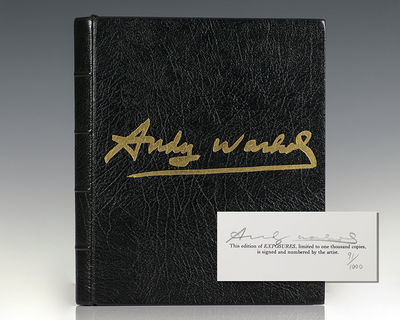 by Warhol, Andy [with Bob Colacello]
New York: Andy Warhol Books/Grosset & Dunlap Publishers, 1979. Signed limited deluxe gold edition of Warhol's candid and engaging photobook. Quarto, original publisher's full morocco, silk watered endleaves, all edges gilt, illustrated, ribbon bound in. One of 1000 numbered copies (although less than 200 are rumored to have been printed) signed by Warhol on the colophon, this is number 91. The two deluxe editions of Warhol's Exposures were issued in "gold" and "silver" editions. In fine condition. I don't think Studio 54 is like pagan Rome. I think it's like junior high school." This collection of Warhol's photographs includes wonderful sections on President Jimmy Carter, Truman Capote, Dali, Studio 54 and numerous celebrities, artists and musicians. The impromptu artistry of Exposures and other photobooks, expressing "the freewheeling existential exuberance and energy of Warhol... [became] a primary inspiration for the Japanese photobook" (Parr & Badger II:144). (Inventory #: 124294)
$4,500.00 add to cart or Buy Direct from
Raptis Rare Books
Share this item

Play It As It Lays.

by McCartney, Paul. [The Beatles]