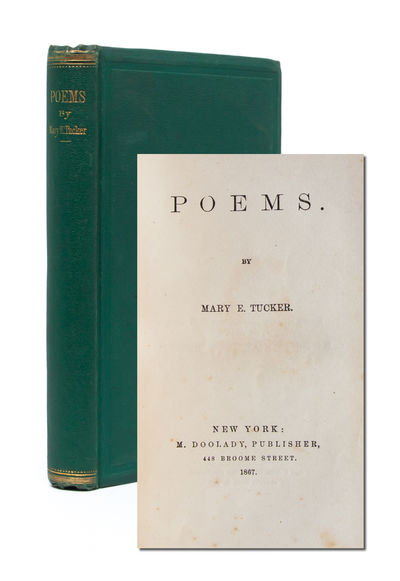 by Tucker, Mary E.
New York: M. Doolady, 1867. First edition. Original publisher's cloth binding with gilt to spine. Brown coated endpapers. A lovely example, square and tight, with just a bit of running to the rear board; light scattered foxing to closed textblock and internally to preliminary and terminal leaves. Contemporary ownership signature to front endpaper: "J. F. Burbank. May 26th, 1868. N. York." Collating xi, [1, blank], 5-237, [1, blank]: complete. Scarce in trade, this selection of poetry by a controversial woman last appeared at auction over a century ago in 1901.

Perhaps more interesting than Tucker's poetry itself is the debate that shapes potential readings of it. Included among the Schomberg Center's recently updated African American Women Writers of the 19th Century list, as well as numerous collections of BIPOC women's anthologies, Tucker has widely been presented as a case in passing. Thus, many scholars have read her Poems as representative, to some extent, of Black women poets who were hesitant to overtly address issues of race in their work for fear of outing themselves (Walker). Others, however, suggest that Tucker's inclusion in such lists stems from a case of mistaken identity; and they argue that the present author was, in fact, a privileged white woman whom early biographers conflated with a biracial woman educator of the same period, whose similarity with Tucker was in name only and not in personal narrative. "Writing of her childhood and adolescence, Tucker emphasizes her transgression of gender and class norms: she was a flirt and a tomboy who...embarrassed her father...and who expressed resistance to conventions of female blessedness" (Gray). Yet if the updates are correct, the present Tucker presents us not with the complexities of a passing narrative, but of a "construction of whiteness...of a southern white woman's self-recrafting just after the Civil War" which is in itself an understudied and valuable area for examination" (Gray). In her introduction to the work, Tucker presents herself and her work as simple and rooted in genuine feeling; the extent of her performance becomes fascinating no matter how we consider "this simple offering on the alter of our common country's literature." Ultimately, reading and interpreting her work opens the door to a wide range of projects and of questions about identity. "To sort out the reals lives of the two historical [women] is to sketch very different instances of American women's literary production, both of which can be useful in filling out current accounts of gender, race, and writing in the nineteenth century" (Gray). (Inventory #: 4225)
$875.00 add to cart or Buy Direct from
Whitmore Rare Books
Share this item