Album Surréaliste. [Catalog of the International Surrealist Exhibition in Japan] 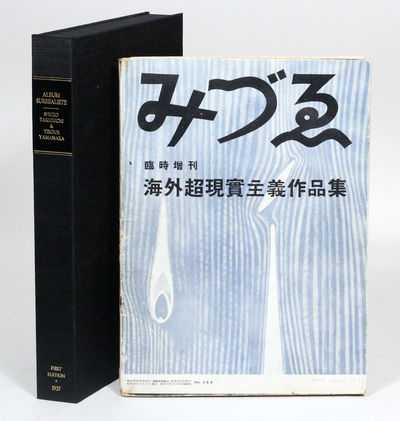 by TAKIGUCHI, SHUZO; YAMANAKA, TIROUX; ed
Tokyo: Takiguchi and Yamanaka, 1937. First edition. Original wrappers. Very Good/Very Good. VERY RARE CATALOG OF THE HIGHLY INFLUENTIAL 1937 TOKYO EXHIBITION OF SURREALISM, FEATURING THE WORK OF NEARLY ALL THE MAJOR SURREALIST ARTISTS OF THE PERIOD. "From June 9 to June 14, 1937, an international Exhibition of Surrealism was held first in Tokyo, then in Kyoto... which was organized by the periodical Mizue-that is, by Shuzo Takiguchi and Nobuo Yamanaka with the help of Éluard, Hugnet, and Penrose. It was, in its way, a consecration of the work begun in Japan by Takiguchi, a poet and theoretician of prime importance who, even more than his professor Junzaburo Nishiwaki, with whom he had founded the periodical Fukuikutaru kafu yo in 1927, was the representative of an authentic surrealism" (Durozoi, History of the Surrealist Movement).

"[T]he 1937 exhibition received limited newspaper coverage. However, the impact on art students throughout Japan was seismic..." (Hopkins, A Companion to Dada and Surrealism).

A MAGNIFICENT AND IMPORTANT PUBLICATION, EXTREMELY RARE COMPLETE AND IN THE ORIGINAL WRAPPERS. (Inventory #: 2439)
$6,800.00 add to cart or Buy Direct from
Manhattan Rare Book Company
Share this item