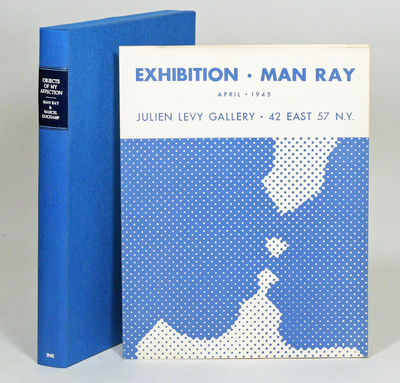 by DUCHAMP, MARCEL; RAY, MAN
New York: Julien Levy, 1945. first edition. as issued. RARE EXHIBITION CATALOG WITH PHOTOMECHANICAL RELIEF PRINT IN BLUE BY MARCEL DUCHAMP ILLUSTRATING HIS CONCEPT OF "INFRA-THIN'. The four-page brochure/catalog was designed to promote the April 1945 exhibition by Man Ray at the Julien Levy Gallery titled "Objects of My Affection." The back of the catalog features definitions by Man Ray of his "objects of affection", while the inside contains a checklist of exhibited works and an introductory essay by Man Ray ("The streets are full of admirable craftsmen, but so few practical dreamers.").

The cover, designed by Duchamp "reproduces an enlargement from a Hackenschmied cinema frame... The lovers kissing are the realization of the marriage through the 'infra-thin' of the Bride's fragrance and the Bachelor's tobacco-laden breath." (Schwarz 510).