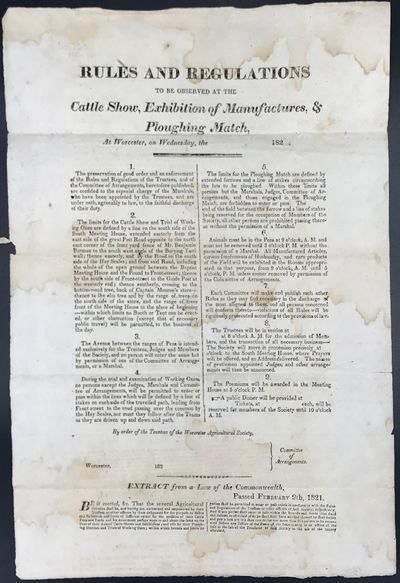 by [Worcester Agricultural Society]
[Worcester, MA, 1829. Broadside. 42 x 28 cm. Old staining, and old fold lines, with one short separation at margin, a shallow chip and a few tiny holes, with no loss. Text in two columns, separated by a single rule, listing nine regulations governing the use of the exhibition grounds, etc. Printed by order of the Trustees of the Worcester Agricultural Society, with space (left blank here) below the columns for the signatures of the Committee of Arrangements. An extract from a State law, passed Feb. 9, 1821 is printed at the bottom of the broadside, giving the Agricultural Societies authority to establish the bounds and limits of the cattle pens and yards for the exhibitions, and for other purposes. Docketed on verso: "Rules of the Agricultural Society."
Rule 6 for example reads: "Animals must be in the Pens at 9 o'clock, A.M. and must not be removed until 3 o'clock P.M. without the permission of a Marshal. All Manufactured Articles, curious Implements of Husbandry, and rare products of the Field will be exhibited in the Rooms appropriated to that purpose, from 9 o'clock, A.M. until 5 o'clock, P.M. unless sooner removed by permission of the Committee of Arrangements." The Worcester Agricultural Society was incorporated in 1818 and the first exhibit was held in October of the following year. Its purpose was "to promote Agriculture, the Mechanic Arts and Manufactures." Membership dues were originally five dollars per year, and the society met semi-annually. During the first half of the nineteenth century, the society was one of the larger and more active organizations in Worcester County. Each year in October the society held an annual fair with livestock and produce competitions and displays of the latest manufactured goods produced by local industries. [see: AAS]
OCLC lists a copy of a similarly titled broadside [though taken from a newspaper], dated 1819, at AAS. (Inventory #: 65723)
$350.00 add to cart or Buy Direct from
Bartleby's Books
Share this item