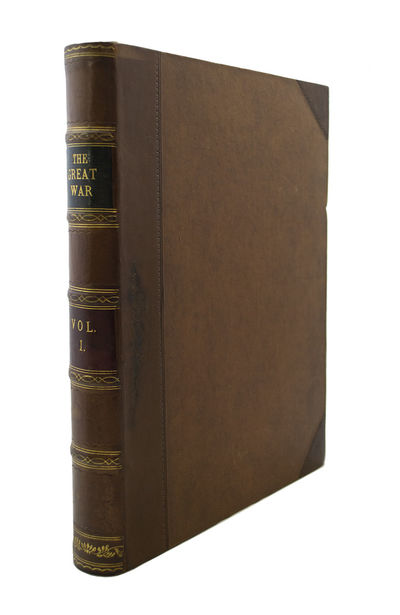 by WILSON, H.W.
An Extensive Work on the First World War WILSON, H.W., [editor]. The Great War. 1914-1918. The Standard History of the All-Europe Conflict. [London: The Amalgamated Press, 1914-1919]. Thirteen quarto volumes (12 5/8 x 9 1/2 inches; 320 x 240 mm). Profusely illustrated with photos, drawings and maps, mostly in black and white, but with some in sepia tone and a few in color. Frontispiece portraits. Bound by C. George in half brown calf over cloth boards. Calf tooled in blind. Spines tooled in gilt. Spines with two morocco spine labels, one black and one red, lettered in gilt. All edges speckled red. Marbled endpapers. Some sunning and rubbing to bindings. Overall a very good set. "Throughout the years 1914-1919 the present Editor, in association with Mr. H. W. Wilson, the eminent authority on naval and military subjects, was responsible for the compilation of the most extensive body of contemporary annals of the war that has been published in this country. The work in question contained no fewer than 7,000,000 words and some 12,000 pictorial documents. Although it remains a storehouse of information for future students of the period, "The Great War," as that set of thirteen massive volumes was called, would now require to be largely re-written in the light of later knowledge : a task beyond the means of private enterprise and of doubtful value to the ordinary reader today." (John Alexander Hammerton, A Popular History of The Great War, Volume 1, The First Phase: 1914. p.3) HBS 68482. $2,500 (Inventory #: 68482)
$2,500.00 add to cart Available from
Heritage Book Shop
Share this item