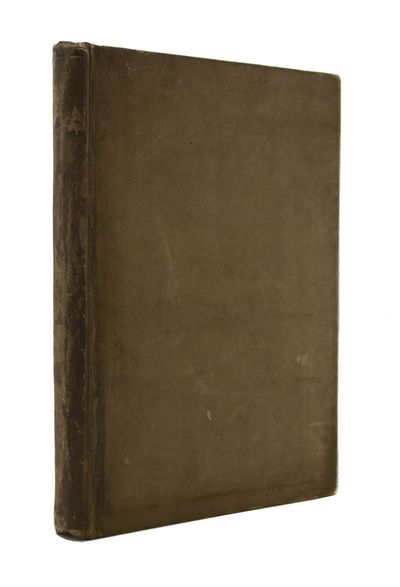 by WILKINS, Charles
First American Edition WILKINS, Charles, [translator]. The Bhagvat-Geeta, or Dialogues of Kreeshna and Arjoon. New York: Reprinted forGeo. P. Philes at the Bradstreet Press, 1867. First American Edition of Wilkinsí translation and one of 261 copies for subscribers printed from the original London edition of 1785. Octavo (9 1/2 x 6 1/8 inches; 240 x 155 mm). [2], 117, [1, blank] pp. Main title printed in red and black. Also with facsimile of the 1785 London edition title-page. We could find no other copies of this edition at auction in over 100 years. Publisherís original drab boards repacked with original spine laid down. Original printed paper label. Edges uncut. Label and spine are darkened and scuffed. Boards with some wear. Some toning from glue to endpapers. Overall a very good copy. "Sir Charles Wilkins, a prominent Orientalist, one of the British Triumvirate with William Jones and James Prinsep, was a pioneer in the study of Sanskrit and his first ever translation of Bhagavad Gita into English opened up new vistas in translation into several European Languages...Charles Wilkins is remembered for his translation of Gita considered as his most important literary contribution. Titled Bhagwat Geeta- or the Dialogues of Kreeshna and Arjooon, Wilkinsí book was published by the prestigious Nourse printing press in Central London in 1785. It is said that Warren Hastings who keenly followed the translation work of Wilkins personally recommended its publication to the Company. In his lengthy introduction to Wilkinsí book , Warren Hastings wrote: ìI hesitate not to pronounce the ë Gitaí a performance of great originality, of a sublimity of conception of reasoning and diction almost unqualified and a single exception among all the known religions of mankind.î Bhagwat Gita was the first Sanskrit text to be translated in to English...Wilkinsí translation marked a watershed in the cultural history of India as it sparked translation into various European languages and attracted worldwide acclaim and attention" (Charles Wilkins: He turned their gaze to Sanskrit, K.S.S. Seshan for The Hindu). "The first English translation of part of the Indian sacred text the Mahabharata. It is better known today as the Bhagavad Gita. The Bhagavad gita, perhaps the greatest and most beautiful of the Hindu scriptures, is the fourth part of the Mahabharata. It is among the more recent parts of that work, dating from around the first or second century A.D. The Bhagavadgita is mainly in the form of a dialogue between the warrior Prince Arjuna and his friend Krishna (the earthly incarnation of the god Vishnu)." (Online Library of Liberty) HBS 68480. $2,500 (Inventory #: 68480)
$2,500.00 add to cart Available from
Heritage Book Shop
Share this item