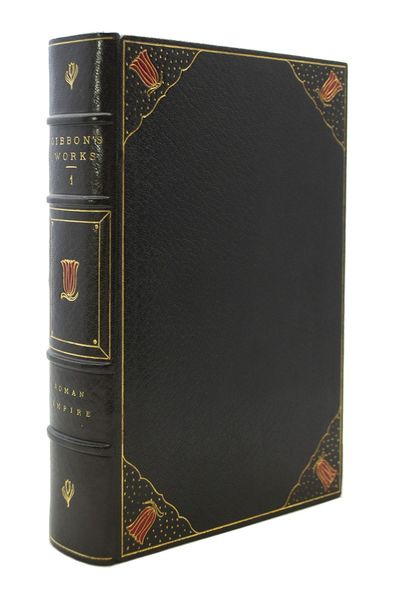 by GIBBON, Edward
A Beautiful Set, Limited to 73 Copies GIBBON, Edward. The Works of Edward Gibbon. New York: Fred DeFau & Company, [1906-1907]. The Sheffield Edition, one of 73 numbered sets, this being number 4. Fifteen octavo volumes (8 1/2 x 5 3/4 inches; 217 x 146 mm). Illustrated, with the plates, some of which are colored, in three states. Comprising: The Decline and Fall of the Roman Empire, The Autobiographies...Printed Verbatim from Hitherto Unpublished Mss., Miscellaneous Works, and Private Letters. Beautifully bound by Macdonald in contemporary full dark blue levant morocco. Covers ruled in gilt, with gilt red morocco floral onlay corner-pieces. Spines tooled and lettered in gilt with gilt red morocco floral onlays. Brown levant morocco doublures paneled in gilt. Cream watered silk liners. Top edge gilt, others uncut. A superb set. Gibbonís Decline and Fall brought to the subject a width of vision and a critical mastery of the available sources which have not been equaled to this day. "This masterpiece of historical penetration and literary style has remained one of the ageless historical works which, like the writings of Macaulay and Mommsen, maintain their hold upon the layman and continue to stimulate the scholar although they have been superseded in many, if not most, details by subsequent advance of research and changes in the climate of opinion. Whereas other eighteenth-century writers in this field, such as Voltaire, are still quoted with respect, the Decline and Fall is the only historical narrative prior to Macaulay which continues to be reprinted and actually read" (Printing and the Mind of Man). Although superseded in many respects by two centuries of continuous research, this great work is still read, both for pleasure and for profit, and has achieved an eminence denied most historical compilations of its kind. HBS 68481. $7,500 (Inventory #: 68481)
$7,500.00 add to cart Available from
Heritage Book Shop
Share this item