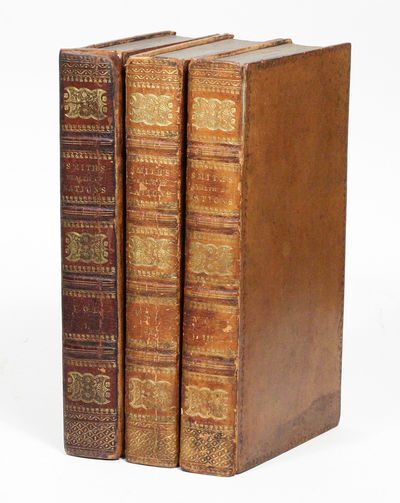 by SMITH, ADAM
London: A. Strahan and T. Cadell, 1786. Fourth edition. Contemporary calf. Very Good. HANDSOME EIGHTEENTH-CENTURY EDITION OF THE "GREATEST CLASSIC OF MODERN ECONOMIC THOUGHT.". This classic work of the Scottish Enlightenment - originally published in the same year as the Declaration of Independence and Gibbon's History of the Decline and Fall of the Roman Empire - is a magisterial study of the sources of national wealth, and of the political and institutional arrangements that foster or suppress it. Based on a 2016 analysis of data from Google Scholar, The Wealth of Nations is the second only to Marx's Das Kapital as the most-frequently cited among books in the social sciences published before 1950. And while Smith recognized the economic benefits that flow from voluntary transactions between individuals, and is as a result sometimes thought of as the apostle of laissez faire capitalism, he supported several forms of government intervention in the economy, either to create and maintain the necessary conditions for economic growth, or to ameliorate the incidental harms that such conditions could create.

The Wealth of Nations proposed that "[n]o society can surely be flourishing and happy, of which the far greater part of the members are poor and miserable. It is but equity, besides, that they who feed, cloath and lodge the whole body of the people, should have such a share of the produce of their own labour as to be themselves tolerably well fed, cloathed and lodged." (WN, this edition, vol. 1, page 119). Smith believed that this condition of society could be achieved only through the higher productivity that is made possible by the division of labor. As an example of the division of labor, Smith offered the example of the "trade of the pin-maker" (which he apparently learned about from Diderot and d'Alembert's Encyclopédie), in which "[o]ne man draws out the wire, another straights it, a third cuts it, a fourth points it, a fifth grinds it at the top for receiving the head ...," and so forth. (WN, this edition, vol. 1, pages 7-8).

In a famous passage, Smith explains that such arrangements arise naturally from voluntary transactions between individuals, based on their common recognition of the benefits that division of labor creates:

This division of labour, from which so many advantages are derived, is not originally the effect of any human wisdom, which foresees and intends that general opulence to which it gives occasion. It is the necessary, though very slow and gradual, consequence of a certain propensity in human nature, which has in view no such extensive utility; the propensity to truck, barter, and exchange one thing for another.

... [M]an has almost constant occasion for the help of his brethren, and it is in vain for him to expect it from their benevolence only. He will be more likely to prevail if he can interest their self-love in his favour, and shew them that it is for their own advantage to do for him what he requires of them. Whoever offers to another a bargain of any kind, proposes to do this. Give me that which I want, and you shall have this which you want, is the meaning of every such offer; and it is in this manner that we obtain from one another the far greater part of those good offices which we stand in need of. It is not from the benevolence of the butcher, the brewer, or the baker that we expect our dinner, but from their regard to their own interest. We address ourselves, not to their humanity, but to their self-love, and never talk to them of our own necessities, but of their advantages. (WN, this edition, vol. 1, pages 19-21).

"Throughout the book Smith's 'system of natural liberty and justice' ... plays a pervasive role as explanatory model and regulatory ideal, though the famous image of an 'invisible hand' appears late and only once in the whole work .... [It appears at volume 3, page 181 of this edition]. A quasi-Newtonian treatment is given to those forces which act like gravity when market price departs from natural price, and it always carries with it a normative implication that policies or practices that prevent these forces from acting are detrimental to the public interest. Monopolies, special privileges, informal combinations by merchants or employers to raise prices and keep down wages, import duties, export bounties, as well as institutions such as apprenticeships and restrictions on labour mobility ... are all condemned from this perspective." (Dictionary of National Biography).

Smith was not unmindful of possible deleterious consequences of the division of labor: "The man whose whole life is spent in performing a few simple operations, of which the effects, too, are perhaps always the same, or very nearly the same, has no occasion to exert his understanding, or to exercise his invention, in finding out expedients for removing difficulties which never occur. He naturally loses, therefore, the habit of such exertion, and generally becomes as stupid and ignorant as it is possible for a human creature to become." (WN, this edition, vol. 3, pages 182-83). Smith believed that public elementary education would compensate for this tendency.

Edition: This copy of The Wealth of Nations is the fourth edition (1786), issued ten years after the first. It was the penultimate edition published during Smith's lifetime, the last being the fifth edition of 1789. It carried forward the significant changes made in the third edition of 1784, without making any material additional changes of its own (as Smith specifically admitted in the prefatory Advertisement to this edition). A detailed collation of the first five editions is provided in Edwin Cannan's 1904 edition of Smith's work.

Provenance: With the armorial bookplate of Thomas Howitt, bearing the motto "Aquila Non Capit Muscas" ("Eagles do not catch flies") on the front pastedown of each volume. Howitt may have been the Lancaster physician of that name (1785-1832; see archives of the Royal College of Surgeons of England, ref no. GB 0114 MS0092 [the entry for Howitt's son, also named Thomas Howitt]). It is possible that Howitt's son, Thomas, Jr. (1830-1922) was responsible for the additions to these volumes described below.

Volume 2 is bound with additional pages at the end on which a prior owner has pasted articles on the California gold rush of 1849, citing a discussion on page 354 of the volume, in which Smith argues that "[o]f all those expensive and uncertain projects, however, which bring bankruptcy upon the greater part of the people who engage in them, there is none perhaps more perfectly ruinous than the search after new silver and gold mines." Another extract pasted at the beginning of volume 1, from an unknown source, recommends the reduction of taxes.