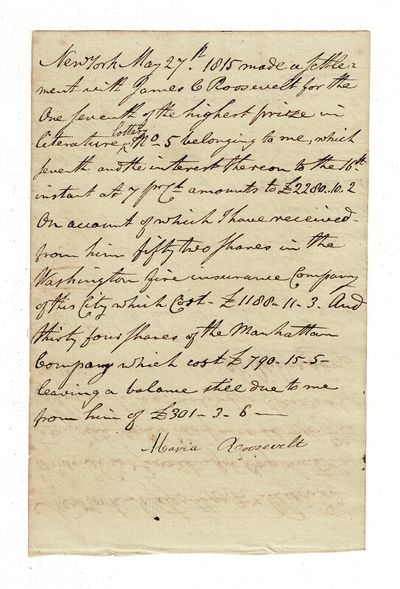 by Roosevelt, James C.
New York: May 4 and 27, June 19, 1815. Manuscript 7Â¼" x 4Â¾" on recto and verso of a single sheet, with signatures of T.A. Anderson, Stephen B. Hoffman, Maria Roosevelt. Legible. One side of the sheet is a receipt (May 27, 1815), signed by Maria Roosevelt in which she acknowledges payment from her father, James C. Roosevelt, of 52 shares of Washington Fire Insurance Company and 34 shares in the Manhattan Company in part payment for "the one seventh of the highest prize in literature lottery No. 5 belonging to me, which seventh and the interest thereon to the 16th instant at 7 pm amounts to Â£2280.10.2." Maria must have won the lottery. The Literature Lottery was held in New York in 1814 to benefit literary institutions such as the Historical Society of the City of New York, Union and Hamilton Colleges. Two other receipts on the verso are for "rent of a house no. 292 Greenwich St" paid for by James C. Roosevelt for $150, signed by T.A. Anderson; and "rent on a lot at no. 328 Warren Street leased by the Corporation of St. Peter's Church West Chester, by order of the corporation ... Stephen B. Hoffman, Treasurer," also paid by Roosevelt in the amount of $75.00 James Christopher Roosevelt, of the Hyde Park Roosevelts and ancestor of Franklin Delano Roosevelt, was born about 1770 of Christopher and Mary (Duryee) Roosevelt, and died around 1840. He married Catherine Byvanek in 1792 and they had a child Maria who married Hackaliah Brown; James Henry, who founded Roosevelt Hospital in New York City; and Catherine Louisa who died in 1830. (Inventory #: 58300)
$230.00 add to cart or Buy Direct from
Rulon-Miller Books
Share this item