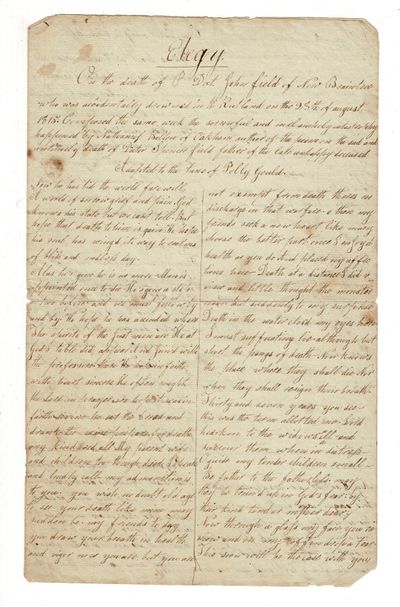 by Bolton, Nathaniel
Oakham, [Mass.]: September 2, 1815. Bifolium approx. 16"x13." Toned, splitting at folds. Ink very legible. This lengthy (154 lines arranged in double column) and romantic elegy on the tragic drowning death of Dr. John Field is similar in style to Thomas Gray's "Elegy Written in a Country Churchyard" which was written in heroic quatrains. "Death in the water clos'd my eyes. Here I must suffocating lie--although but short the pangs of death. None knows the place where they shall die Nor when they shall resign their breath". At head of the poem is "Adapted to the tune of Polly Gould," an eighteenth-century English ballad which featured a death bed scene. The text also includes "Acrostic on the Death of Doct John Field" and An Acrostic on the Widow Rhoda Field": "Relentless death heart aching to relate has snatched away your dear beloved mate...left mother wife and children to grieve..." A quarter page of stray notes on the back page are geographically related; "Persian Gulf is southwest of Persia, James bay is south of Hudson's Bay..." Nathaniel Bolton, Jr. (1745 - ca. 1824) was born in Bridgewater, Mass., but lived in Oakham, just northwest of Worcester. A poet and school teacher, at least three of his poems were published including "A poem on the Surrender of General Burgoyne." Boston Public Library holds his "A Poem on Infidelity." Dr. John Field (1777-1815) was born in Oakham, Mass., the son of Dr. Spencer Field, also a physician. Tragically, both met early and untimely deaths; the father run down by a speeding horseman while on his way to treat a sick woman, and his son, drowned in Demond Pond while fishing. Field had been fishing with his uncle who fell out of the boat and in trying to get back in capsized it. A passing stranger saved the uncle but could not reach Dr. Field in time. A much revered physician, a monument was erected on the spot at Demond Pond in Rutland in 1899. (Inventory #: 58301)
$402.50 add to cart or Buy Direct from
Rulon-Miller Books
Share this item