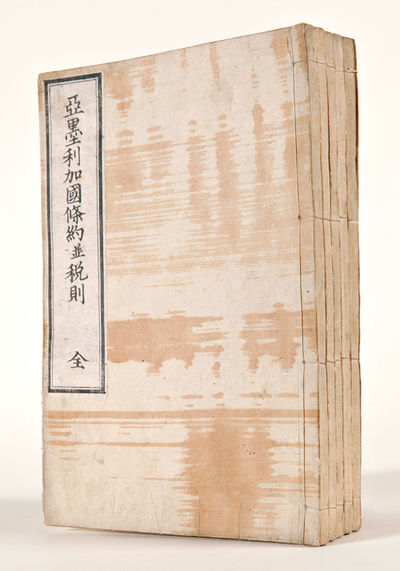 by [Japan]
[Japan, 1858. Five volumes. [58]; [58]; [54]; [58]; [58]pp. Original stiff textured tan wrappers, stitched as issued, each with printed paper title label. Some minor shelf wear and dust soiling. Very good. An attractive set of the "Ansei Five-Power Treaties," the formal diplomatic engagements between Japan and the United States, United Kingdom, France, Russia, and the Netherlands, ending Japan's 250 years of seclusion and opening its ports to worldwide commercial trade (so named for their signing in the fifth year of the Ansei era). The first treaty, also known as the Harris Treaty, was signed by the U.S. on the deck of the USS "Powhatan" in Edo (now Tokyo) Bay on July 29, 1858. It opened the ports of of Shimoda, Hakodate, Kanagawa, and Nagasaki to foreign trade effective July 4, 1859, and then Niigata and Hyogo on January 1, 1860 and January 1, 1863, respectively. In addition to extensive trade and consular provisions, the treaty also established the rights of U.S. citizens to reside permanently, lease property, purchase real estate, and construct residences and warehouses; established a system of extraterritoriality whereby U.S. residents were subject only to the laws of their own consular courts and not the Japanese legal system; and established freedom of religious expression and the right to construct churches to serve the needs of U.S. residents within the confines of designated foreign settlements. The treaty followed the Convention of Kanagawa, signed under threat of force in 1854 after Commodore Matthew Perry's aggressive visits to the Shogunate in 1853 and 1854. The Convention had granted coaling rights for U.S. ships and allowed for an American consul in Shimoda, but Perry left the more important trading negotiations to Townsend Harris, New York businessman and eventually the first U.S. Consul General to Japan.

Each of the five volumes details the negotiations between Japan and a specific foreign power. These other accords are similar and duly inspired by the U.S. treaty; each nation forced Japan to grant the same "favored nation" provisions they had granted to the U.S. The Dutch already had several treaties with Japan; they were the only Western power to retain trade relations with Japan after the final expulsion of Europeans in 1638, and had been advising and supplying the Japanese navy since 1853. However, once the U.S. had sealed its "Treaty of Amity," the Dutch quickly revised theirs to match on August 18, 1858; Russia followed on August 19; Lord Elgin signed for Britain on August 26; and Jean-Baptiste Louis Gros (commander of the French expedition in China) signed for France on October 9, 1858. Subsequent Japanese and Chinese scholars refer to these treaties and subsequent agreements as the "unequal treaties," as none of the provisions were ever reciprocated.

This set is uncommon. We found only one record for another (incomplete) set at auction. This is the first time we have handled this title. (Inventory #: WRCAM52130A)
$4,500.00 add to cart or Buy Direct from
William Reese Co. - Americana
Share this item