The Mark on the Wall 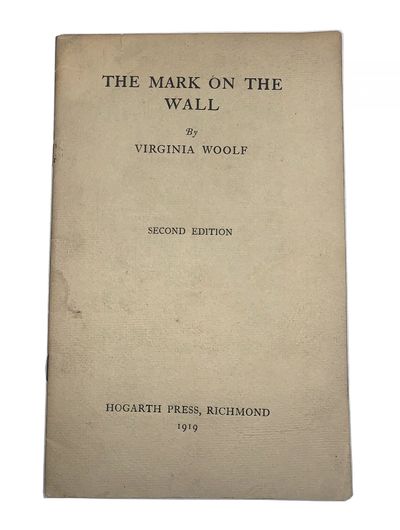 by Woolf, Virginia
Richmond: Hogarth Press, 1919 First separate edition (but labeled "second edition" on front wrapper), one of 1,000 copies. Publisher's thin off-white laid paper wrappers, stapled binding, printed at the Pelican Press with "Made in England" stamp to rear wrapper. Very good, with some toning to edges, front wrapper with small light stain at spine and a ½" closed tear to top edge, some light soiling to wrappers overall and rear wrapper with some residue, staples rusting slightly, interior with some foxing. Overall, a pleasing copy in original wrappers of a scarce and early work of Woolf, which is also an early publication of her Hogarth Press. Kirkpatrick A2b, Woolmer 8. This publication is erroneously designated as the second edition, but it is truly the first separate edition of Woolf's story The Mark on the Wall, which was first published in Two Stories in 1917, alongside Leonard Woolf's Three Jews. Two Stories was the first publication of the Woolfs' Hogarth Press, and was printed by the Woolfs themselves on a hand-press in a run of 150 copies (see Woolmer 1, Kirkpatrick A2a.) Demand for orders soon overwhelmed what the small press could produce, so the Woolfs had the 1,000 copies of this edition printed at the Pelican Press in East London.. First Separate. Original Wraps. Very Good. (Inventory #: VW124)
$1,000.00 add to cart or Buy Direct from
B & B Rare Books
Share this item

London: Macmillan and Co. , 1894
(click for more details about The Jungle Book)
View all from this seller>