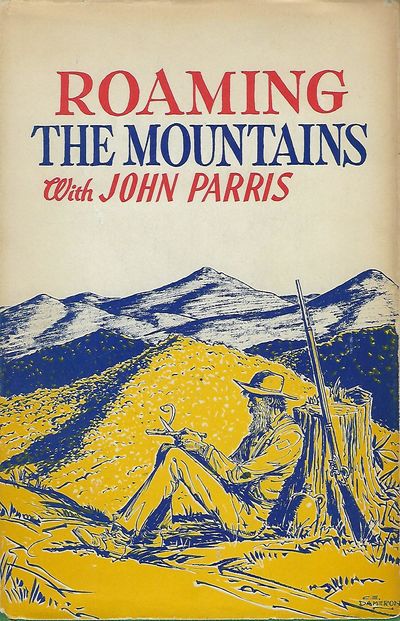 by PARRIS, John
Asheville, NC: Citizen-Times Publishing Company, 1955. First Edition, Signed presentation from Parris on the front endpaper: "For Mr. & Mrs. Francis J. Heazel Jr., With best wishes- John Parris, Asheville, N.C. Dec. 7, 1955." Francis James Heazel Jr. was a member of Phi Delta Phi fraternity at the University of North Carolina. His father, Francis James Heazel [1891-1977], was a prominent lawyer and civic leader and president of the Asheville Area Chamber of Commerce; He served on the Sinking Fund Commission and the North Carolina National Park, Parkway, and the Forest Development Commission. Heazel helped organize the Western North Carolina Associated Communities and was chairman of its project committee. A major accomplishment of this group was to transform the life of the Eastern Band of the Cherokee through the Cherokee Historical Association, a non-profit corporation chartered by the state, which produced the highly successful outdoor drama, "Unto These Hills." Since its debut on July 1, 1950, "Unto These Hills" has told the tale of Cherokee life from 1780 to the 21st century. This title is a collection of Parris's mountaineer stories of Western North Carolina, which made his column for "The Citizen-Times" newspaper a popular newspaper feature. 8vo., green cloth in dust jacket; 246 pages. Very Good (covers nice & bright; contents clean & tight with little browning to the front & rear endpapers); some edgewear (very tiny chips & tears; little browning spine which also has a very tiny hole near the bottom; price-clipped) d/j. (Inventory #: 57426)
$75.00 add to cart or Buy Direct from Antic Hay Books
Share this item
Antic Hay Books
Offered by

AFTER THE COLD WAR: AMERICAN FOREIGN POLICY, EUROPE, AND ASIA

by CYR, Arthur I.

AFTER THE COLD WAR: AMERICAN FOREIGN POLICY, EUROPE, AND ASIA

by CYR, Arthur I.