What and how: a practical cook book for every day living. [By] Mrs. Walter D. Bush 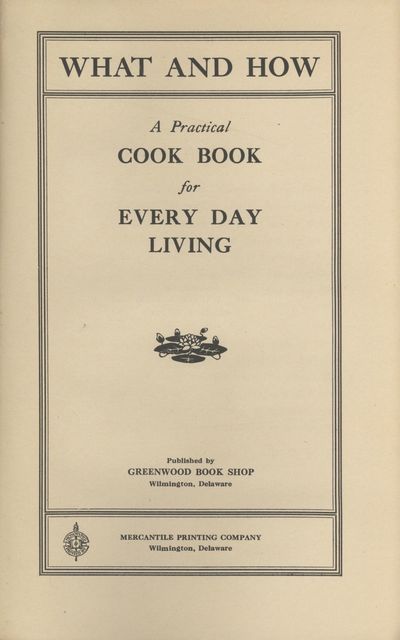 by Bush, Mrs. Walter D. [Rebecca Gibbons Tatnall Bush]
Wilmington, Delaware: Published by Greenwood Book Shop; [Printed by] Mercantile Printing CompanyCompany, 1920. Octavo (21 x 14 cm.), 350 pages. Advertisements (some illustrated). Index. Author credit and date of publication from copyright statement on title-page verso. ~ Evident second (revised) edition. A clarifying testament to the success of an important Mid-Atlantic single-author cookbook whose first appearances in 1910 and 1911 have created significant bibliographic confusion (cf Brown, Culinary Americana 397, 398, and 421). At the same time an acknowledgment that cookbooks by single authors are distinguished from community cookbooks chiefly by convention; for, after thanking the prolific writer Marion Harland (1830-1922), her "pathfinder, counselor, and friend" (as the dedication reads in the early edition), the author expresses further indebtedness "to many good friends who have passed along that which they found good" and thanks them "for the suggestions that I should do the same." Some eight hundred recipes, many brief, but many also with ingredients and amounts listed beforehand. Among them: Iced Coffee, Apollinaris Lemonade, Clam and Tomato Bisque, Kornlet Soup, Shad Roe, Beauregard Cod, Braised Mutton, Sausage and Fried Apples, Chicken Pilau, Butter Beans, Poke Stalks, Baked Onions, Spinach Souffle, Squash Rolls, Corn Slappers, Huckleberry Cake, Minquedale Cookies, Mint Marshmallows, Greengage Marmalade. ~ The overall conceptualization proves practical indeed, entailing helpful notes that fulfill the promise of the title - on both "how" (for instance, on using a fireless cooker as an alternative) and "what" (for instance, on scraps and small quantities that might be saved back for later use, such as sour milk for biscuits and oatmeal for hotcakes). Mrs. Walter Danforth (Rebecca Gibbons Tatnall) Bush (1853-1927) had been a lifelong Wilmingtonian from a literary family, when she turned to her cookbook project after the death of her husband in 1903. In addition to her culinary ambitions, she retained an interest, as did Marion Harland, in the fate of emancipated slaves long after the failures of Reconstruction, serving for a number of years as synodal Secretary for Freedmen on behalf of the Presbyterian Women's Home Missionary Society. ~ Textblock age-toned; hinges starting. In publisher's tan cloth with corners bumped, spine darkened, and head and foot of spine lightly chipped. Good. [OCLC locates seven copies; this clarifying edition not in Brown]. (Inventory #: 5541)
$90.00 add to cart or Buy Direct from
Rabelais: Thought for Food
Share this item