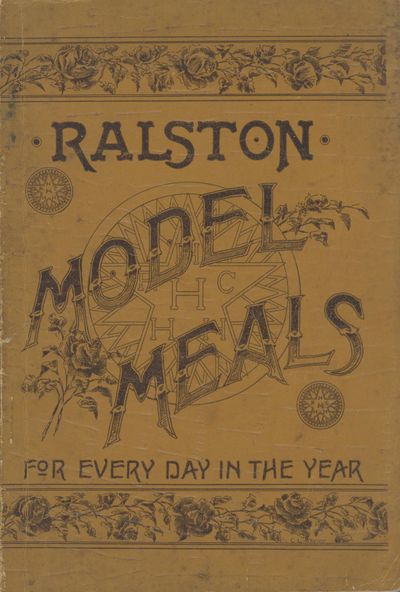 by [Ralston Company (Washington, D. C.)]. [Ralston Health Club (Washington, D.C.)]. [Webster Edgerly]
Washington, D. C.: Ralston Company, 1895. Octavo (24 x 15.5 cm.), 46, [2] pages. Membership application at rear. Cover title: Ralston Model Meals for Every Day in the Year. ~ Evident third edition, but first so-titled. Originally published in 1894 under the title, Ralston Meals For Every Day... with 38 pages. A second edition, with just 31 pages, was issued in 1895, and later that year, this third, enlarged, edition. A health community cookbook with recipes numbered 30 to 253 (numbers 1-29 enumerate minimally prepared foods such as Bouillon Tea as well as selected grains and fruits). A propensity can be seen for broiled poultry and boiled vegetables, but the coverage is broadly standard for its time, as baked goods and puddings do not necessarily "interfere with the health of the stomach" (page 29). Interest lies less in the entries themselves than in the recommendations for their consumption (yams ought not be eaten more than once per week; pearl tapioca should be avoided, as should dried currants, as both cause appendicitis). ~ A document of the curious social movement, geographically anchored in the District of Columbia, known as Ralstonism. The Ralstonite system of model meals - here outlined in fifty-five chapters - rested on a "philosophy" of digestibility, the determination of which might involve many factors. "A hard boiled egg will digest," we learn for instance, "every bit of it, but will take much more time [than will a soft boiled egg]. This extra amount of time that the egg is in the stomach, so that it is not fermenting, will furnish staying power [...]" (page 59). Strictures against red meat and game alongside the promotion of fresh and dried fruits, vegetables, and grains, of course, already had an acknowledged pedigree in health-conscious circles. But present, too, are some dubious physiological speculations, proffered on the basis of "the many experiments made by the Ralston Health Club" (page 60). ~ Devised by Webster Edgerly (1852-1926), writing under the pseudonym Edmund Shaftesbury, Ralston was an acronym meant to stand for principles of healthy living (Regime, Activity, Light, Strength, Temperation, Oxygen, Nature); or perhaps more accurately a backronym, designed to fit out the surname of another concocted alias: Everett Ralston, if the labyrinthine story related in the 1900 edition of the Club's membership book can be believed (Book of Star Ralstonism, 12th nominal edition; 77th actual edition [Washington, D.C.: Ralston Publishing]). Odd though its origins may seem, the name survived for decades as that of a breakfast cereal marketed by the Purina Mills Company of St. Louis. ~ Slight soiling; central opening loose. Stapled in stained faux-leather brown wrappers with black lettering and decoration; moderately scuffed and corners bumped. Good. Scarce. [OCLC locates two copies of the 1905 edition, as well as several copies of similarly titled editions dated 1894 and 1895; Brown 416; not in Cagle]. (Inventory #: 5909)
$90.00 add to cart or Buy Direct from
Rabelais: Thought for Food
Share this item

The Cook's Assistant. Tested Receipts of Many Good Housekeepers. Published for the benefit of..

Hartford, Conn : Press of Wiley, Waterman, & Eaton , 1887
(click for more details about The Cook's Assistant. Tested Receipts of Many Good Housekeepers. Published for the benefit of..)

New York : Charles Scribner's Sons , 1895
(click for more details about The Chafing-Dish Supper)
View all from this seller>