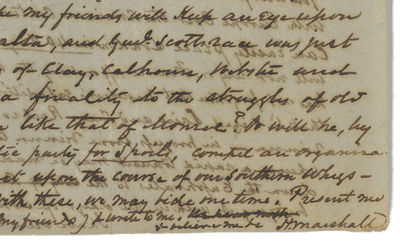 by Marshall, Humphrey (1812-72)
1852. A long and descriptive holographic letter written on December 5, 1852 by Humphrey Marshall, a four-term antebellum United States Congressman, who later served as a brigadier general in the Confederate States Army and a Confederate Congressman during the American Civil War. At the time of this letter, Marshall was the U.S. Minister to China and wrote about his travels in Egypt, where he predicted the pivotal role for world commerce of Suez, Egypt, more than a decade before the Suez Canal opened and offered vessels a direct route between the North Atlantic and Indian oceans. The three-page letter described the treacherous overland journey he made to view the work being done at Suez by the British Peninsular and Oriental Company.

Marshall wrote to his friend "Stephen" that the British were further advanced than the United States in their thinking and overall global investments. At the time, the British Peninsular and Oriental Company provided the only regular and reliable mail, passenger, and cargo service between Europe and Egypt, India, Ceylon, Malaya, China, and Australia. In those early years, before the construction of a railway from Alexandria to Suez, the transit across the isthmus was primitive. For the first part of the journey, goods and passengers were transported from Alexandria to the Nile by canal boat before continuing by river steamer to Cairo, and then disembarking once more for the land portion of the trek through the desert from Cairo to Suez, a distance of some 100 miles.

Marshall provided detailed descriptions of his adventure and some of the locations he visited along the way, including the incomplete Great Mosque of Muhammad Ali Pasha. In his letter, Marshall explained that not all of the journey was controlled by the Company: "You must understand that the Pacha has exhibited the good sense to decline any grant of power to transport baggage or passengers across his Pachali to the British Peninsular and Oriental Company and has monopolized the business himself and performs that service himself for the profits resulting there from, and he charges the most enormous prices. For instance, 9 pounds equals $45 for a passage to Cairo in a van."

The van was described as a sort of cart carrying several passengers and lead by a team of four horses. Along the route, telegraph stations were established every five miles along with stables, where the horses are switched out. Halfway between Cairo and Suez, the Pacha had built a palace. "Desolation surrounds it on every side and every drop of water used at it is transported from Cairo 40 miles. The reigning Pacha spends most of his time there, it is said, and likes the seclusion," he wrote.

Marshall's van carried fellow travelers and was accompanied by another van that carried Le Chevalier Capella, the Sardinian consul to Calcutta. "Suddenly the van of the Chevalier (which was a few paces in front on mine) stopped and I heard loud voices talking in excitement and apparent anger. I jumped out of our van taking in my hand at the same time a Colt revolver which was charged in case we should be attacked by robbery and found that we were surrounded by about 50 armed men all turbaned and wearing Egyptian costume."

Marshall soon discovered they were on the lines of a great caravan of about 12,000 Egyptian pilgrims returning from the tombs at Mecca, and they were told they would have to turn back. He protested, saying it would be an affront to his government and after speaking through a translator with the Pacha of the caravan, they resolved that the great caravan would move on because it would be deemed back luck if the travelers entered their camp or crossed in front of them. He then related a story about trying to give his revolver to the Pacha, which resulted in some misunderstandings that nearly led to more problems. The travelers were stopped one more time, but ultimately arrived in Suez.

"Suez is a ruin," Marshall wrote. "Except the persons engaged in the transit administrations, and the servants of the Peninsular and Oriental Company, the population of Suez is most miserable. The houses are built of a coral stone and crudely put together, the people are badly clad, and the whole affair presents the appearance of entire decay."

Despite his poor report of the conditions at Suez, he wrote excitedly to his friend about its pivotal role in European commerce and the wisdom of the British in developing overland railways that would connect Alexandria to Cairo, and ultimately extend to Suez: "It will be completed to Cairo in a comparatively short time, and the journey from the Mediterranean to the Red Sea will be made in a day."

In the closing paragraphs of his letter, Marshall wonders whether he would be "recalled" by the new President, and whether he had a chance of a new appointment. In November, Democrat Franklin Pierce defeated Whig nominee General Winfield Scott. The U.S. Consul General of Egypt in 1852 was Daniel Smith McCauley, who died in October, and the new Consul, Richard B. Jones, was not appointed until December 28, 1852.

One edge of the leaves is worn with a few closed tears and small chips. There is a one-by-one inch piece missing from pages 3 and 4, with minimal loss to the text but no loss to the overall narrative. (Inventory #: 73701)
$600.00 add to cart Available from Johnson
Share this item

by Friendship Club of The Northfield