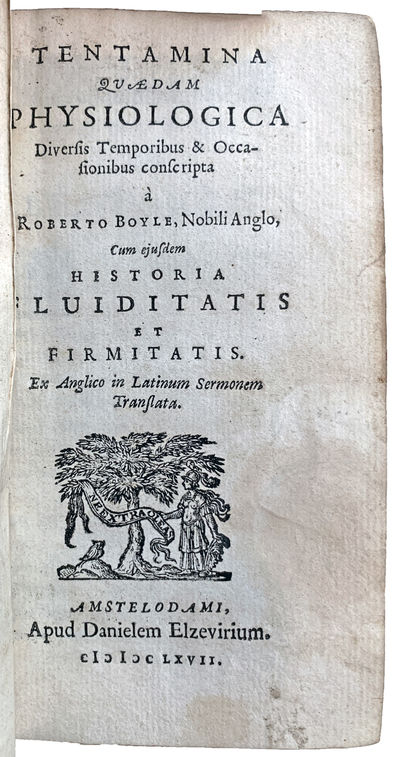 by BOYLE, Robert (1627-1691).
Amstelodami,: Apud Danielem Elzevirium, 1667., 1667. 12mo. [8], 424 pp. Original full mottled calf, gilt-stamped compartments, spine ends and extremities worn. Early ink notes (7-line index of major sections in this volume) on rear pastedown. Bookseller label: Masson & cie.; rubber stamp: Doctor Mario E. Spada. Scarce. First issued in 1661 by Herringman in London. This is the third Latin issue, the first printing on the continent and the first by Daniel Elzevir (1626-1680). The work, rather rare, contains various tracts on physics, chemistry, meteorology, and physiology. / Boyle's most important work, The Sceptical Chymist, issued in 1661, was to serve as an attack on alchemists. This work originally issued in 1661 was a further attack on alchemy. "The importance of the 'Essays' [1661] lies in the fact that in a very real sense it was a 'prologue' to the more widely known Sceptical Chymist since it continued the attack on the alchemists begun in New Experiments, and actually it was as much a landmark in the history of chemistry. In the 'Essays' Boyle gives the first clear outline of his corpuscular hypothesis concerning the nature of matter, which was to be the guiding principle of all his later chemical studies . . . " – Fulton, p. 20. / "Perhaps the most significant of all Boyle's writings from this period – indeed, one of the most seminal of his entire career – was his Certain Physiological Essays (1661), which took up the themes of the second part of the synopsis 'Of Naturall Philosophie' . . . " – Michael Hunter, Boyle, Between God and Science, p. 112. / "Physicist, physiologist, chemist, and philosopher, Boyle was one of the great scientists and intellects of the seventeenth century. In Boyle's bibliography, John Fulton lists more than three hundred items, including contributions in chemistry, physics, medicine, philosophy, and theology. Although he was not formally trained as a physician, Boyle was deeply interested in the medical sciences and was made a "Doctor of Physick" at Oxford in 1665. Boyle was also a leader in the movement to separate chemistry from alchemy and was among the first to define a chemical element. His interests were wide-ranging and included studies on the properties of acids and bases, hydrostatics, respiration, combustion, magnetism, electricity, and the chemical nature of the blood. In this first edition of his Essays, Boyle presents a summary of his views on physical laws and their relation to human physiology. It is here that he gives the first statement of his "corpuscular hypothesis," or mechanical theory of matter." – Heirs of Hippocrates, 564 [Certain physiological essays. Printed for Henry Herringman 1661]. CONTAINS: 1) Commentatio Prooemialis . . . ; 2) Tentamina quaedam de infido Experimentorum successu; 3) Specimen unum atque alterum e quibus constat, quantopere Experimenta Chymica; 4) Historia Fluiditatis et Firmitais. PROVENANCE: Masson & cie. (1927) – Doctor Mario E. Spada – Dr. Hernan Demonti. REFERENCES: Fulton 29; Wellcome I, p. 221; Willems 1376; Wing 1376 (Inventory #: M14137)
$450.00 add to cart Available from
Jeff Weber Rare Books
Share this item