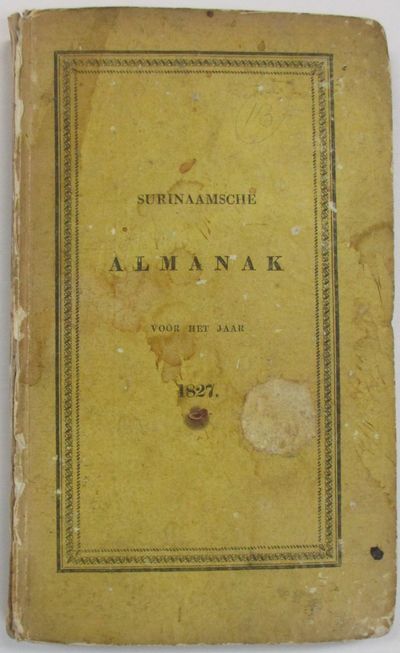 A rare Almanac, significant for its voluminous information about Slavery, plantations, and the thriving Jewish life in this plantation colony of The Netherlands, located on the north coast of South America. "Until the mid-19th century, slaves, mostly from the west coast of Africa, constituted the majority of the population. The small European population was mainly of Dutch origin but also included others from France, Germany, and Great Britain, as well as a Jewish community, which had arrived largely from Portugal, Spain, and Italy via Brazil" [Encyclopedia Britannica].
The Almanac reports detailed information on trade, local government, Sugar Plantations including those owned by Jews, and other aspects of Jewish life in this remote locale. Prominent Jewish families of Surinam are noted: de Pina, de Meza, de Mesquita, de Vries, de la Parra, da Costa, del Castilho, Nassy, Cotin, Delmonte, Emden, Fernandez, de Leon, Juda, etc. Ashkenazi family names also appear (Keyser, Heilbron, Soesman, etc). The almanac provides extensive detail concerning the running of every Jewish-owned plantation in Surinam. This includes information concerning location and size of each plantation, type of crop, slave-holdings, landowners, administrators, directors, officers, etc.
Also much detail is provided of civil and religious life, including synagogue affairs of both the Portuguese and Ashkanazic Jewish communities. (Inventory #: 37298)
$3,500.00 add to cart or Buy Direct from
David M. Lesser, Fine Antiquarian
Share this item
David M. Lesser, Fine Antiquarian Books LLC
Offered by