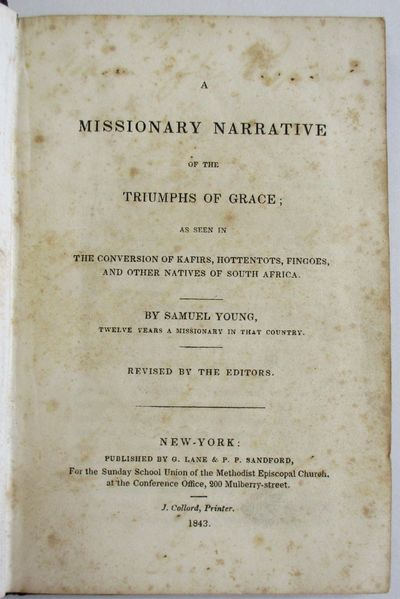 First printed in London in 1842, this is the first American edition. A Wesleyan Missionary, Young spent twelve years among people whom he calls "Kaffirs," residents of an area of southeast Africa called "Kaffraria." The Preface, written in January 1843 in New York by "S.B.W.," describes their physical appearance as "tall, robust, and muscular; and though nearly black in their complexion, have not the least trace of the Negro, either in their form or countenance." Physically, there is no "finer race of men in the world; but in their moral and social condition they are degraded indeed. The dress of the men is nothing more than the skin of an ox... Marriage among the Kaffirs is but a traffic in women." They are woefully mired in "ignorance," "superstition," and "many extremely barbarous practices."
FIRST AMERICAN EDITION. AI 43-5437 [2]. OCLC 81810942 [2- Yale, AAS], 14254566 [1- Drew U] as of March 2021. Not in Work, Blockson, LCP. (Inventory #: 37444)
$450.00 add to cart or Buy Direct from
David M. Lesser, Fine Antiquarian
Share this item
David M. Lesser, Fine Antiquarian Books LLC
Offered by