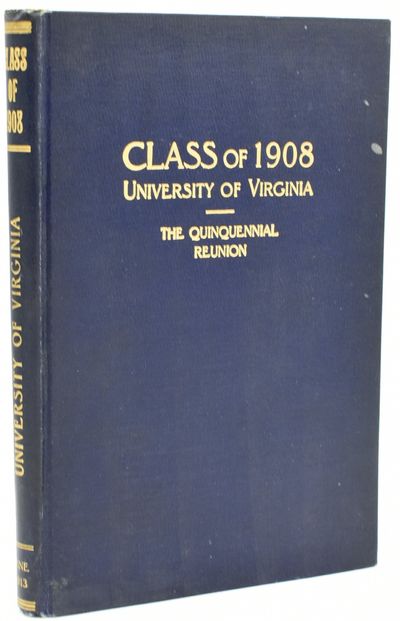 by Lewis Crenshaw [Secretary]
Roanoke, Virginia: Stone Printing and Manufacturing Co, 1905. First Edition. Very Good binding. 8vo.; in the publisher's blue cloth binding with titling in gilt to the upper board; 140 pages; illustrated with droll photographs, sketches and saying throughout. Laid in is a folded broadside (23 1/2" x 8 3/4") listing the membership of the class, with their addresses.~~A typed letter on the reunion letterhead is laid in and is of interest. The class secretary, Dr. William A. Kepner wrote to class member Alvin Hutzler of Richmond, apparently in response to a complaint from Mr. Hutzler that the reunion was being promoted as a time of heavy drinking. While the secretary takes responsibility for this impression, he assures Mr. Hutzler that this will not be the case: "The thing for those of us, who will not take it into our heads to show the undergraduates how to drink, is to come back and thus see to it that the men who do go on a spree are far in the minority".~~For two typed pages, Secretary Kepner assures Mr. Hutzler that the reunion will be a sober affair, and not a "big spree". He even cites Woodrow Wilson as complaing about the drinking reunions of Princeton alumni as being "one of the great handicaps in her real work." ~~. Very Good binding. (Inventory #: 293582)
$150.00 add to cart or Buy Direct from
Black Swan Books
Share this item

Indianapolis : The Bobbs-Merrill Company , 1932
(click for more details about [CIPHERS] [CODES] [GAMES] YARDLEYGRAMS)
View all from this seller>