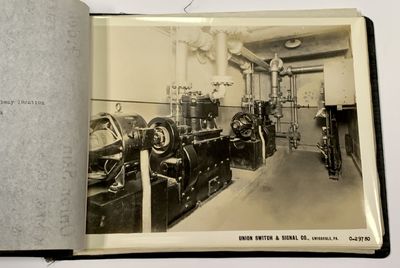 All housed in a commercial limp black vinyl 3 post binder

"The IND Eighth Avenue Line is a rapid transit line in New York City, United States, and is part of the B Division of the New York City Subway. Opened in 1932, it was the first line of the Independent Subway System (IND), and the Eighth Avenue Subway name was also applied by New Yorkers to the entire IND system.

The line runs from 207th Street in Inwood south to an interlocking south of High Street in Brooklyn Heights, including large sections under St. Nicholas Avenue, Central Park West, and Eighth Avenue. The entire length is underground, though the 207th Street Yard, which branches off near the north end, is on the surface. Flying junctions are provided with the IND Concourse Line, IND Sixth Avenue Line, and IND Queens Boulevard Line.

Most of the line has four tracks, with one local and one express track in each direction, except for the extreme north and south ends, where only the two express tracks continue. Internally, the line is chained as Line "A", with tracks A1, A3, A4, and A2 from west to east,[7] running from approximately 800 at the south end to 1540 at the north end (measured in hectofeet)." [Wiki]

Here offered a fascinating album of b/w photographs documenting select equipment made by the Union Switch and Signal Company of Swissvale, Pennsylvania, and installed in various settings along New York's IND 8th Avenue rapid transit line. We presume Union Switch & Signal Co. used this album no only to document their switching apparatus installed on the line, but also as a sales tool, showing other municipal leaders their equipment's use by the city of New York.