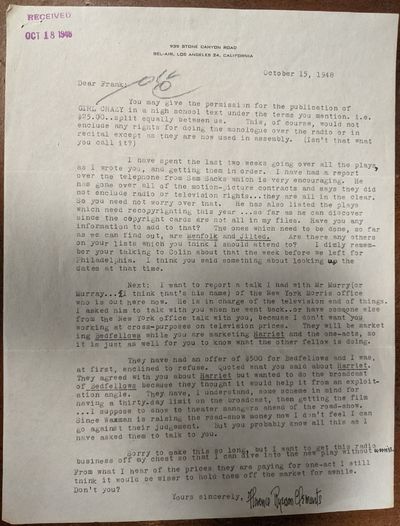 by RYERSON, Florence (1892 -1965) (WIZARD OF OZ)
1948. fine. Very scarce T.L.S, "Florence Ryerson Clements", 4to. 1 page, Los Angeles, October 15th 1948, to her literary agent concerning the licensing of her plays, in small part: "We have an offer of $500 for the Bedfellows and I was, at first, inclined to refuse. Quoted what you said about Harriet. They agreed with you about Harriet but wanted to do the broadcast of Bedfellows because they thought it would help it from the exploitation angle. They have, I understand, some scheme in mind for having a thirty-day limit on the broadcast, and then getting the film... I suppose... to show to theatre managers ahead of the road show." Boldly signed and in excellent condition. From the archive and papers of Samuel French & Son's. RYERSON, Florence (1892 - 2013 1965) American playwright best remembered as the co-author of the screenplay for the 1939 classic film The Wizard of Oz. Her contributions were numerous including the creation of the multi-roles of actor Frank Morgan who played the Wizard and Ryerson's invented character Mr. Marvel. She also focused the story almost entirely on Dorothy's desire to return home and the Wicked Witch's desire to possess the Ruby Red Slippers. It was her script that introduced the blatant "There's No Place like Home" motif to the film: In order to return to Kansas, Dorothy must click the Ruby Red Slippers together and say three times; "There's No Place Like Home". It was also her idea that Dorothy first melted the Wicked Witch by accident because the witch was attempting to set fire to the Scarecrow, an idea that preserved Dorothy's purity of motive. (Inventory #: 300147)
$600.00 add to cart or Buy Direct from
Argosy Book Store
Share this item