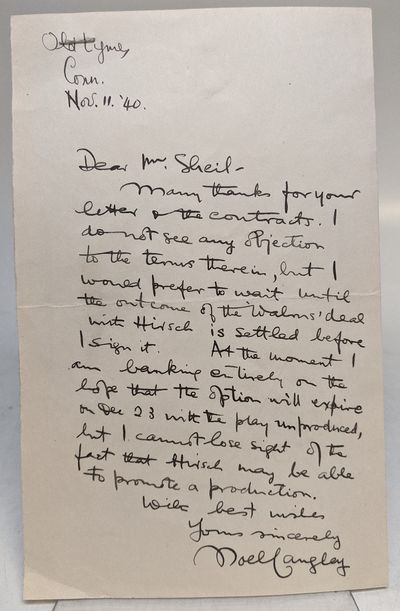 by LANGLEY, Noel
Old Tymes, 1940. fine. Very scarce A.L.S., 8vo. 1 page, Old Tymes, Connecticut, November 11, 1940, less than one year after the success of Oz and only one year before he would join the Canadian Navy during World War II, in full: "Many thanks for your letter and the contracts. I do not see any objection to the terms there-in, but UI would prefer to wait until the outcome of the Walm's deal with Hirsch is settled before I sign it. At the moment I am entirely on the hope that the option will expire on December 23rd with the play unproduced, but I cannot lose sight of the fact that Hirsch may be able to promote a production". When Langley came out of the Canadian military following World War II he went to England and worked on several screenplays with luke-warm success. He became a United States citizen in 1961 and soon thereafter, worked part-time as a drug counselor in California. Boldly signed and in excellent condition. From the archives of Samuel French & Son's. LANGLEY, Noel - (1911 - 1970) South African playwright best remembered as the 26 year old writer of the screenplay for the 1939 classic film The Wizard of Oz - and is one of the three credited screenwriters of the film. Langley literally ditched half of Frank Baum's book and added such important original concepts as the Ruby Red Slippers; instead of two good witches he amalgamated the Good Witch of the North with Glinda into one character. In Baum's book, Dorothy encounters many threats to her safety - but in the screenplay Langley turned the wicked witch of the West into Dorothy's sole adversary. Most important, he introduced to the story the inclusion of the actors playing the Tin Man, Scarecrow and Cowardly Lion as farmhands and family in the sepia-tone Kansas sequence as well as introducing Miss Almira Gulch, the Wicked Witch's counterpart. By doing this Langley created the continuity that bridged the characters as "real" people in Kansas to their roles in the Land of Oz; something that Baum could never perceive. (Inventory #: 300149)
$650.00 add to cart or Buy Direct from
Argosy Book Store
Share this item