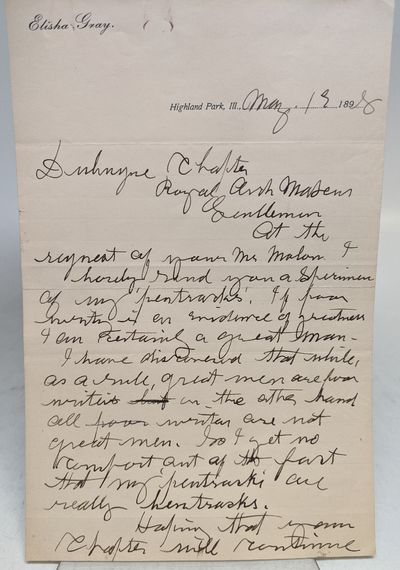 by GRAY, Elisha
Highland Park, 1898. fine. Scarce A.L.S. 8vo. 2 pages, personal letterhead, Highland Park, Illinois, May 13th 1898, responding to the Royal Arch Museum, who had previously requested a sample of Gray's handwriting so that they could provide a profile analysis, in part: "I hereby send you a specimen of my pen-track. If from writing it is evidence of greatness - I am certainly a great man. I have discovered that while as a rule, great men are born writers...on the other hand all born writers are not great men. So I get no comfort out of the part that my pen-track are really hen-tracks..." Boldly signed and in excellent condition. GRAY, Elisha -(1835 - 1901) - American electrical engineer who co-founded The Western Electric Company and is best remembered for his development of a telephone prototype in 1876. Many modern scholars convincingly argue that Gray should be considered the "true" inventor of the telephone because Alexander Graham Bell stole the idea from him. (Inventory #: 300150)
$1,000.00 add to cart or Buy Direct from
Argosy Book Store
Share this item