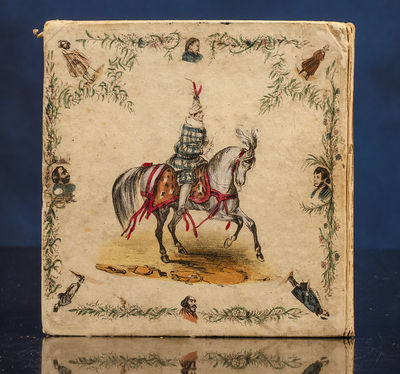 Publisher's color pictorial lithograph boards,smooth spine lettered in black, slight rubbing to extremities and corners, small one-inch split to upper board. Still a near fine example of this very rare little book in the publisher's binding. With the small bookseller's label of H. Rohr, Zurich, on rear pastedown. An excellent example of this rare little color-plate book.

Rare, this is the only colored copy that we have ever seen. OCLC locates just one 'uncolored' copy in libraries and institutions worldwide at Zeeuse Bibliotheek Middelburg (Netherlands).

In this charming little album of artistic fantasies, Victor Adam depicts many different and amusing scenes including 'an old couple', military men, horses, camels, and a wonderful scene 'Le Gentil' the laughing stock of the village ladies who amusingly protects himself from being bitten by the local dogs by holding two chairs...

Jean Victor Adam (1801-1866) was a French painter and lithographer. Born in Paris he was the son of Jean Adam, an esteemed engraver. During the years 1814 to 1818 he studied at the Ecole des Beaux-Arts, and also in the ateliers of Meynier and Régnault. In 1819 he exhibited 'Herminia succouring Tancred.' He was almost immediately afterwards employed to paint various subjects for the Museum at Versailles, amongst which are, 'The Entry of the French into Mainz,' 'The Battle of Varroux,' 'The Taking of Menin, 'The Battle of Castiglione,' 'The Passage of the Cluse,' 'The Battle of Montebello,' 'The Capitulation of Meiningen;' the last three in association with Alaux. He also exhibited down to the year 1838: 'Henry IV., after the Battle of Coutras,' 'Trait of Kindness in the Duke de Berri,' 'The Postillion,' 'The Vivandiere,' 'The Road to Poissy,' 'The Return from the Chase,' 'Horse-fair at Caen,' and numerous other subjects. He then retired from publicity, till 1846, when he appeared as the exhibitor of some works in lithography, to which branch of art he afterwards restricted himself. In this line he produced a lithographic album, 'Views in the Environs of Paris,' 'Studies of Animals for an edition of Buffon,' &c. He obtained a gold medal in 1824, a second class medal in 1836, besides several others from Lille, Douai, and other cities. He died at Viroflay in 1866.

Alexis Eymery (1774-1854) aka. Amélie d 'Avignon de Norew was a French bookseller, printer publisher and writer. He was a leading publisher of educational books in the 19th c. Eymery went to Paris at the beginning of the 19th c. where he worked first at the Ministry of War and began writing for the theater since 1801. On May 2nd, 1809, he joined forces with the bookseller Pierre Blanchard (1772-1856) to form the company P. Blanchard et compagnie which became on November 30th, 1811 Blanchard and A. Eymery. The association was officially dissolved on May 4th, 1812 and the two partners split the business with Eymery keeping the address of 30, rue Mazarine. Eymery was the author of plays as well as numerous religious or moralizing books for young people published under different pseudonyms. His works were published between 1801 and 1854 and then posthumously between 1857 and 1867. He directed the collection of the Education Library founded by his daughter Désirée Eymery in 1834. His Bookshop was at 15, quai Voltaire from 1834 to 1844, he died at Neuilly-sur-Seine on May 1st, 1854. (Inventory #: 05085)
$1,500.00 add to cart or Buy Direct from
David Brass Rare Books
Share this item