AVIATION IN TRANSITION? AIRCRAFT TO BE OF DIFFERENT TYPE 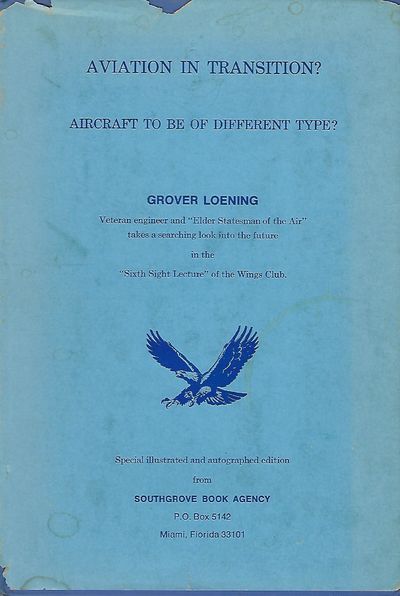 by LOENING, Grover
[NY]: The Wings Club, 1969. First Edition. Signed presentation from Loening on the front endpaper: "To Ellis Phillips Jr., distinguished diplomat and aircraft executive, With personal regards, Grover Loening. Key Biscayne Sept.-1969." Ellis L. Phillips Jr. was the fifth president of Ithaca College. His career took him to the New York law firm of Burke and Burke. In 1953 he became a professor at Columbia Law School, where he also served as an assistant dean until his departure for Ithaca College in 1970. From 1957 to 1958 Phillips also was special assistant to Ambassador John Hay Whitney in London. He also was a member of the Grumman Corporation and Wiltek boards of directors. He was married to Marion Grumman, the daughter of Leroy Grumman, co-founder Grumman Aircraft Engineering Co., later renamed Grumman Aerospace Corporation, and now part of Northrop Grumman. The Grover Loening Award is given to Civil Air Patrol (CAP) Senior Members who complete Level III of the Senior Member Professional Development Program. The award was first given in 1964 and honors the author, Grover Loening- a noted aviation pioneer who built the Aeroboat in 1912, was assistant to Orville Wright in 1913, Chief Aeronautical Engineer to the US Army Aviation Section 1914 and founder of two aircraft. He was the first civilian member of the National Air and Space Museum's Advisory Board. He was a prolific writer on aviation. Tall 8vo., decorative blue cloth, stamped in silver, in original dust jacket; 41 pages. Sixth Sight Lecture of the Wings Club. Illustrated.. Very Good (covers nice & bright; contents clean & tight with very minor browning front endpaper); little chipping & wear to the fragile dust jacket. (Inventory #: 57429)
$100.00 add to cart or Buy Direct from Antic Hay Books
Share this item
Antic Hay Books
Offered by

BURTON'S BOOK ON CALIFORNIA AND ITS SUNLIT SKIES OF GLORY

Los Angeles, California : Times-Mirror Printing And Binding House
(click for more details about BURTON'S BOOK ON CALIFORNIA AND ITS SUNLIT SKIES OF GLORY)
View all from this seller>