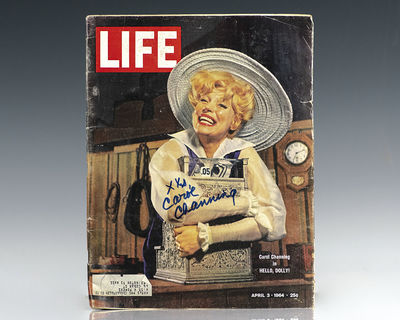 by [Channing, Carol]
New York: Life Magazine, 1964. April 3, 1964 issue of Life Magazine signed by legendary musical actress Carol Channing. Folio, original wrappers, illustrated. Inscribed by Channing on the front cover which features a photograph of her performing in the 1964 Broadway musical Hello, Dolly!, "XXX Carol Channing." In very good condition. Based on a book by Michael Stewart, itself based on Thornton Wilder's 1938 farce The Merchant of Yonkers, Hello, Dolly! follows the story of Dolly Gallagher Levi, a strong-willed matchmaker, as she travels to Yonkers, New York, to find a match for the miserly "well-known unmarried half-a-millionaire" Horace Vandergelder. The musical debuted at the Fisher Theater in Detroit on November 18, 1963 and moved to Broadway in 1964, winning 10 Tony Awards, including Best Musical. The role of Dolly Gallagher Levi was originally written for Ethel Merman but she turned it down, as did Mary Martin--although both eventually played it. Merrick then auditioned Nancy Walker, but he hired Carol Channing who created her signature role in Dolly. (Inventory #: 124841)
$100.00 add to cart or Buy Direct from
Raptis Rare Books
Share this item